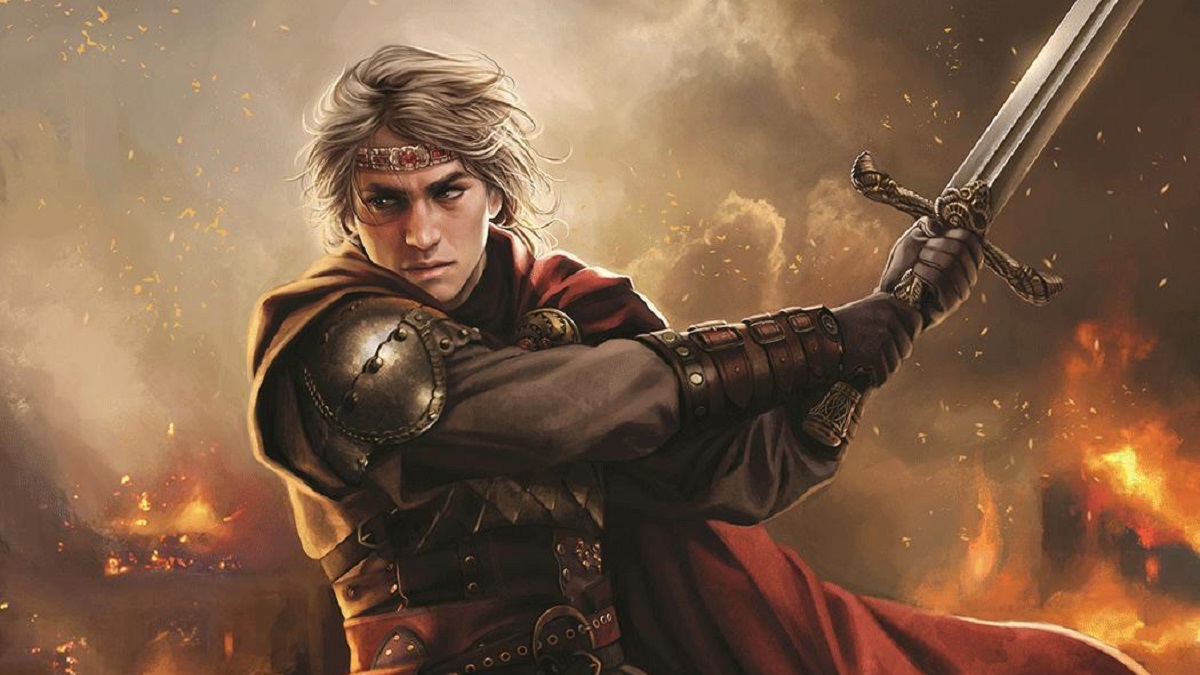 You could leaf through the entire history of the Seven Kingdoms and barely come up with the names of five honorable rulers. It’s only every few hundred years that Westeros graces its inhabitants with a good king, and whoever takes the Iron Throne in between abuses their power to such an extent that George R.R. Martin’s fantasy world as a whole could be used as the best argument against monarchism.

Of course, that means the majority of the kings who have ascended those stairs in the Red Keep and sat on the world’s most uncomfortable chair have either been cruel, incompetent, or both, giving us a rich depository of names to choose from in the Song of Ice and Fire saga. But even gauging them in terms of tyrannical influence, some Kings of the Andals, Lords of the Seven Kingdoms, and Protectors of the Realm have truly outshone the competition by an estimable margin, so we’ve decided to list them below from worse to the absolute worst.

Viserys I Targaryen or Viserys the Peaceful

We all love Viserys from House of the Dragon, but most of that adoration has to do with the charismatic way in which Paddy Considine brought him to life. In hindsight, Viserys’ reign was riddled with mistakes, often due to the king’s indecisiveness, that ultimately led to the most devastating civil war in the history of the Targaryen dynasty and the Seven Kingdoms. Granted, the king himself was not a cruel person, nor did he particularly abuse his power — at least no more than any monarch with unimaginable power would — but those same mistakes still put him on this list from an objective historian’s point of view.

Robert Baratheon or the Usurper

Much like Viserys, Robert Baratheon wasn’t exactly a cruel man, he was simply the worst choice to sit on the Iron Throne. He was a formidable and proud warrior in youth, so much so that he defeated Rhaegar Targaryen in single combat during the Battle of the Trident. Robert’s main incentive for going up against Aerys was to avenge the love of his life Lyanna Stark, whom Rhaegar had allegedly kidnapped.

When he took the crown, Robert had no desire to rule, and though he presided over a period of peace in the Seven Kingdoms, no one could claim that he did anything to improve the lives of his subjects. Robert never refrained from his baser desires, spending the majority of his time drinking and whoring and hunting, which earned him the alias of the Whoremonger King. As Game of Thrones fans know, Robert ultimately died when he tried to spear a boar while he was in a state of paralyzing inebriation. This was later confirmed to have been a plot set in motion by his wife Cersei Lannister, who spiked the king’s drink with a strongwine, thrice as effective as what he usually drank.

Daeron I or the Young Dragon

This is a controversial choice as many deem the Young Dragon one of the great kings of Westeros. Even Jon Snow claims at one point in the books that Daeron is one of his heroes. But despite being a great warrior and strategist, Daeron I spent the majority of his rule focused on the conquest of Dorne, who had never bent the knee to his ancestors when they first came to Westeros. Daeron thought that the Targaryens had “unfinished business” with the arid kingdom, which turned into a full-blown obsession.

He eventually managed to defeat the Dornish armies and bring them to heel, but at the cost of losing ten thousand soldiers, and killing countless others from the enemy’s ranks. The Dornish nobles would rebel in the aftermath, and it is said tens of thousands more died when Lord Lyonel Tyrell, appointed by Daeron to crush the resistance, fought against them over the next three years. Ultimately, Daeron returned in person to crush the Dornish once and for all, but fell into an ambush when he tried to negotiate with them under a peace banner. Daeron died fighting side-by-side with his Kingsguard and surrounded by dozens of Dornish soldiers.

Joffrey I Baratheon or the False King

You all knew Joffrey would definitely be making the cut as soon as you clicked on this article. He was the eighteenth king to sit on the Iron Throne, during whose reign the infamous War of the Five Kings took place and sent Westeros wobbling into another period of bloodshed and chaos. He was also sadistic in nature and took pleasure in torturing his subjects, some of which the Game of Thrones series on HBO depicts in earnest.

There are certainly a lot of reasons to hate Joffrey, countless even, but when it comes to actually ruling the realm, the people were mostly spared thanks to Tyrion Lannister and his father Tywin serving as Joffrey’s Hand of the King, respectively, and taking those matters of governance out of his hands, which suited his ignorant and apathetic nature all too well.

Aerys was the last Targaryen king to sit on the Iron Throne before Robert Baratheon succeeded him in 283 AC. When he started out, Aerys was generous and ambitious and cared greatly about the realm and the legacy of his dynasty. But as the years went by, he became obsessive about his family’s safety and grew paranoid.

The Mad King would see a conspiracy in every corner of the realm, giving into false assumptions or imagining a treacherous plot in the making with every unexplained event. He started burning all those who opposed him, among them Rickard and Brandon Stark, which ultimately fused Robert’s Rebellion and brought about his downfall. The Mad King’s last act was to order his pyromancers to burn King’s Landing to the ground with wildfire, a plot that Jaime Lannister put an end to when he forsook his oath and killed the king.

Aegon IV or Aegon the Unworthy

The fourth Targaryen king to be anointed with the name of Aegon is generally considered to be one of the worst rulers in Westerosi history. Such was the extent of his decadence and incompetence that historians now call him Aegon the Unworthy. While Aegon IV started his rule as a handsome and lively young man, he ended it as a corrupt tyrant who was morbidly obese.

The man just never stopped indulging himself, and he visited cruel acts upon his subjects at whim. He also had close to a dozen mistresses and sired numerous bastards. His actions caused great strife in his court, which resulted in not one, not two, but five Blackfyre rebellions. After living past 49 and reigning for 12 years, Aegon died a horrid death when his obese body became so swollen that he could not stand up from his seat. According to the maesters, Aegon’s limbs were infested with worms, something they had never seen before. His last act was to legitimize all his bastards, which led to the Blackfyre uprisings and the doom of innumerable people.

Maegor I or Maegor the Cruel

Maegor was the third Targaryen king to ascend the throne after Aegon’s conquest. He was the son of Aegon and his sister-wife Visenya Targaryen, and he has gone down in history as Maegor the Cruel. That should tell you everything you need to know about the man, but if you want specifics, brace yourself for some of the most atrocious Westerosi crimes you could possibly imagine. According to some tales, when Maegor was given a sword as a child, he immediately used it to butcher a cat. He was a fearsome warrior, and actively sought out fights even when they were not necessary.

When he ascended the throne after his brother, he began a rule of terror that would last for six years and six days. During that time, Maegor fought against the Faith and numerous rebellions and crushed them all with an iron fist. He would behead everyone who disagreed with him, a courtesy he allegedly extended to his wife as well. When Maegor presumed that Queen Ceryse Hightower had affronted him, he had one of his knights cut out her tongue, but his wife thrashed about so violently that Ser Owen Bush mistakenly cut her throat. Maegor’s biggest achievement was the construction of the Red Keep, which interested him greatly. He presided over the process thoroughly and asked the workers to put in secret passages and tunnels all over the keep. When the work was finished, Maegor I held a feast for three days and invited all of the constructionists and stonemasons to celebrate with him. At the end of the third day, he had all of them beheaded to protect the secrets of the keep.

Like all tyrants, Maegor’s subjects eventually grew weary of putting up with his cruelty, and during the events of the last challenge to his rule, put forth by Prince Jaehaerys, he was found dead one day sitting on the Iron Throne with a sword jammed in his throat.

We’d be remiss not to mention Aegon II, a character in House of the Dragon, who has just usurped the throne from his sister Rhaenyra Targaryen. Going through the chronicles of his life would obviously send us into spoiler territory, so for the time being, let’s just say that he wasn’t the best of rulers and leave it at that. Of course, you probably already knew that.

As for rulers before Aegon the Conqueror set foot on Westeros, Harren the Black or Black Harren is definitely a name that comes to mind. He was the last king of the Iron Islands and the Rivers and a man hated by all his subjects due to his abject cruelty. He’s mostly remembered as an evil old man whose stories frighten children before bedtime.