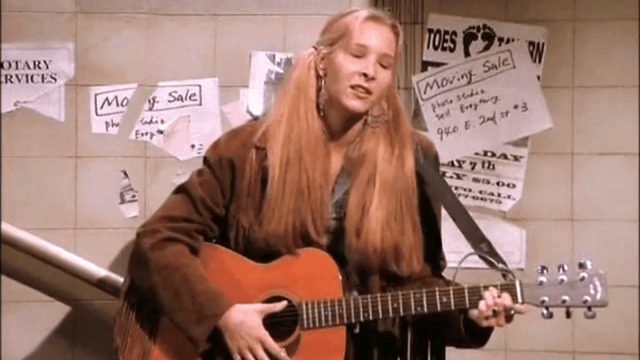 There are many parallels to be drawn between Friends and How I Met Your Mother – the character dynamics, the love interests, and the primary setting of New York City. So it wouldn’t be too much of a stretch to envision a plane of existence in which these two worlds collide.

One fan theory on Reddit, however, takes the overall jovial tone of both shows and flips it on its head to create something quite grim. The author of the thread took an existing fan theory around Friends being a figment of Phoebe’s imagination, based on a group of people she saw in Central Perk, and took it a step further.

Rather than Phoebe peering into Central Perk, instead, we’re working with a homeless Ursula peering into MacLaren’s Pub. Ursula, for the uninitiated, is Phoebe’s twin sister. The author contextualizes the theory by establishing Ursula as having lived a rough life following a failed music career and being subjected to sex work and alcohol abuse.

This might not be too much of a stretch, considering we know Ursula and Phoebe had a rough upbringing, and at one point Ursula was even working in the adult film industry masquerading as her sister.

So Ursula frequents the front of MacLaren’s Pub, and the HIMYM gang frequents the pub itself. She doesn’t know them, and they don’t know her, so she comes up with imaginary names for this group of strangers she seems pulled towards.

The one outlier in this theory is Lily as Monica, as she and Chandler don’t get together until around halfway through Friends’ run, but her sisterly relationship with Ross does somewhat parallel Lily and Ted.

It doesn’t sit well with Ursula that this lovely group of strangers spend so much time at a bar, so instead, in her mind’s eye, she places them in a coffee shop and joins them in these fantasies as a plucky vegetarian and creative with a rough upbringing. Oof.

How I Met Your Mother was recently a point of discussion around some of the worst TV series finales of all time, while Kenan Thompson took a bit of a dig at Friends during the opening of the 2022 Emmys.