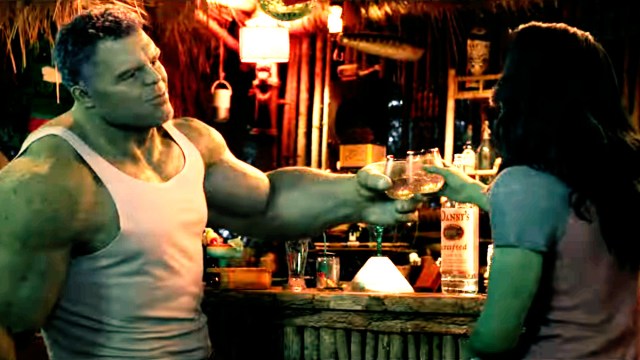 With She-Hulk: Attorney at Law just one week away from smashing onto Disney Plus, a brand-new clip from the series has hit the web which offers both a sneak peek at the key moment which turns Jennifer Walter’s life around and also offers a taste at the irreverent humor that will mark out what is being pitched as the MCU’s first proper sitcom.

The minute-long clip, as first shared by IMDb, sees Tatiana Maslany’s heroine sharing a car ride with her cousin Bruce Banner (Mark Ruffalo). Having an Avenger in her passenger seat seems to have caused Jen to espouse a working theory of hers: that Steve Rogers was actually a virgin. But their chat about Captain America’s sex life comes to a premature end as the pair collide with an unexpected vehicle on the road…

Well, first of all, Jen and Bruce’s conversation echoes many a Reddit thread that’s been written about Steve’s love life, or lack thereof, over the years. Fans have often debated whether Steve and Peggy managed to, uh, fondue back in the war. And there’s that wild theory that he might actually be Peter Quill’s grandfather. This is just the latest IRL Marvel fan debate made canon, after Paul Rudd’s Thanos-butthole reference in a theme park ride.

The much bigger takeaway from this clip, though, is that a frickin’ spaceship is the cause of the car crash that results in Jen transforming into She-Hulk in the first place. The ever-eagle-eyed MCU fandom has immediately deduced that this same type of ship was previously seen on Sakaar in Thor: Ragnarok. So it seems that the Grandmaster may be hunting down his lost champion. Are we about to get the Jeff Goldblum cameo that Love and Thunder denied us?

She-Hulk: Attorney at Law makes its case on Disney Plus from next Thursday — not Wednesday — Aug. 18.