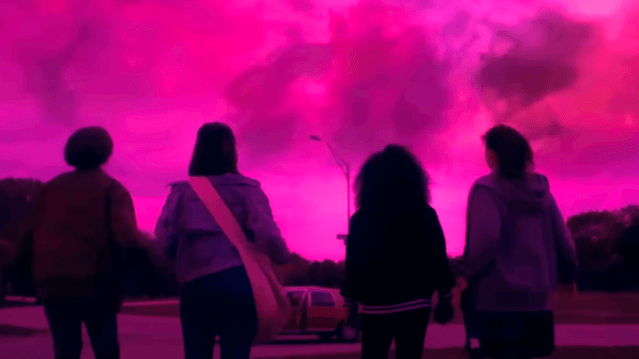 In one, sweet, simple motion, Amazon Prime Video teed itself up to go toe-to-toe with Netflix’s Stranger Things and The Umbrella Academy with a brand new teaser trailer for the upcoming series Paper Girls, based on Brian K. Vaughan’s sci-fi comic book series of the same name.

First announced by the streamer in 2019, Paper Girls takes place in the year 1988, or it does, at least, until protagonists Mac, Tiffany, Erin, and KJ, four best friends who deliver newspapers together, find themselves caught in the middle of a war between different bands of time-travelers, landing them in the year 2019. As their responsibilities escalate from paper delivery to world saving, the girls go on a dizzying, time-jumping adventure whilst encountering their future selves along the way, forcing them to come to gripes with what will be.

The Paper Girls comic has frequently been compared to Stranger Things, with its 80s pop culture homages and kids-on-bikes aesthetic for the protagonists, and the overwhelming presence of time travel may echo similar comparisons to The Umbrella Academy. Without even mentioning the success of the show’s source material, Paper Girls is drawing upon an ethos that has proved worthy of critical acclaim time and time again, and the show’s tantalizing teaser trailer is doing all the favors for Amazon Prime’s latest adaptation.