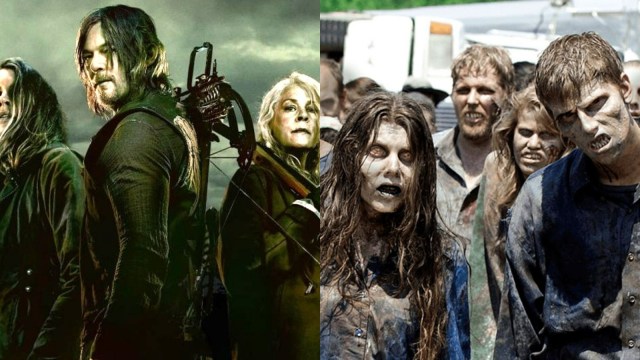 The Walking Dead is a dead show walking.

After over a decade, the smash-hit post-apocalyptic drama is set to call it a day when the last third of its eleventh season unfolds on AMC this fall. But fans don’t need to grieve too badly as the TWD universe will outlive its parent series, with various spinoffs in the works, like Norman Reedus’ Daryl spinoff and a vehicle for Maggie (Lauren Cohan) and Negan (Jeffrey Dean Morgan).

So with much more to come from this franchise, The Walking Dead season 11 is due to bow out by dropping a major curveball into the zombie mythology that will no doubt cause ripples for those spinoffs. As revealed in the thrilling trailer that premiered at July’s San Diego Comic-Con, the survivors are about to encounter something fans have been wishing to see for years: smart zombies.

Has The Walking Dead featured smart zombies before?

Across eleven whole years, TWD has stuck to its guns and always hewed closely to the traditional “dumb n’ lumbering undead” form of zombie depicted in Robert Kirkman’s original Image Comics series and has never gone in for those new-fangled clever, speedy zombies. But the rules will be loosened in season 11, part 3, going by the SDCC trailer’s tag.

“I’ve heard stories of walkers that can climb walls and open doors,” Aaron (Ross Marquand) intones ominously. “I was never sure if they were just stories.” It looks like they weren’t as a couple of clips show one walker turning a doorknob and another hoisting themselves over a wall.

This might seem like a huge development, but TWD exec producers Scott M. Gimple and Greg Nicotero stressed while speaking to Entertainment Weekly that these smart zombies are not “any sort of reinvention.” Gimple, the franchise’s chief content officer, stressed: “It’s addressing something that is inside the show already.”

Those with long memories will know what he’s talking about. In the first few episodes of the series, way back in 2010’s season 1, there were a few instances of zombies being smarter or faster than the norm – such as a zombie attempting to smash a window with a rock in episode 2. While revisiting the show’s beginning to get ideas for the final run, the writers and producers picked up on these inconsistent moments and decided to address them head-on.

“The truth is we hadn’t really figured out yet what the rules for the zombies were,” admits Nicotero — the zombie make-up maestro of the series — about that odd walker behavior.

How will The Walking Dead explain smart zombies?

So how come we’ve never seen these smart zombies again if the show is now confirming that these moments weren’t just goofs and they really do exist? It turns out that these more discerning dead have been out there the whole time, it’s just that our heroes haven’t encountered them before. Nicotero let slip to EW that the final episodes make clear that other geographical regions spawn different types of walkers:

“We sort of played into that as if there might be certain walkers in certain regions that might have different abilities that we really haven’t seen before. We’re kind of playing into the idea that some of these are out there and they’re just encountering them now.”

Fans with their fingers on the pulse may be wondering if the smart zombies will link to The Walking Dead: World Beyond finale’s shocking post-credits scene, in which we learned that a French lab is experimenting on walkers. Gimple told EW that there is no correlation between the two plotlines, however.

“These are very distinct environments and very distinct landscapes… That was out in Europe,” he maintained, although he did tease that the Daryl spinoff is where we can expect this thread to be picked up. “But we know someone who’s going to be out there, so he might have his hands full.”

In light of the coming of the smart zombies, maybe it’s more accurate to say that The Walking Dead isn’t ending, just… evolving. Don’t miss season 11, part three when it kicks off Oct. 2 on AMC.