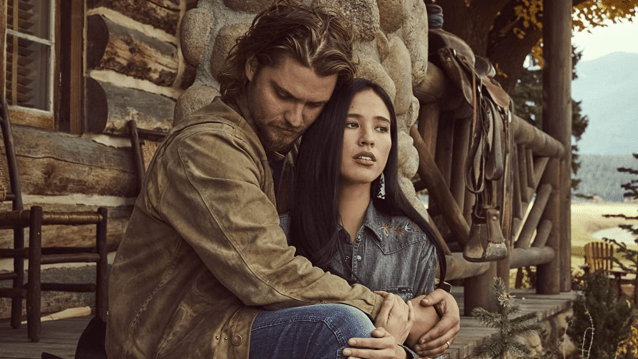 Warning: This article contains spoilers for the new season of Yellowstone.

Paramount’s number one series returned with an impressive two-hour television event highlighting the Dutton’s new journey through our favorite cowboy drama, Yellowstone. The characters in the series are in their most vulnerable state as we continue to uncover what changes — both good and bad — that they’ll experience as new episodes explain the unfolding story.

Part of that story was teased in season four, and while it was different for each character, they all intertwine. John Dutton is the Governor of Montana in the new episodes, while Beth returns to work for her father. Jamie feels more disconnected than ever as Kayce and Monica continue building their family.

Of course, fans who sat down for the entirety of the season premiere were met with the heartbreaking reality that their family dreams have been put on hold. After a devastating crash, Monica loses the baby they were so thrilled to be expecting. Just weeks away from her due date, the loss is heartwrenching.

In a conversation the couple shares after they return home from the hospital, Monica asks Kayce if he saw the death of their child during his vision quest. The question was as heartbreaking to hear as it must have been for her to ask it. So what did she mean when she asked him that question, and how does it relate to his vision quest? Fans of the series will know that Kayce gave Monica a six-word warning when he returned home from the three-day quest.

I saw the end of us.

So what exactly did he mean, and what does it mean for the future of Monica, Kayce, and Tate? Let’s take a look.

When did Kayce go on a vision quest?

Kayce went on a vision quest at the end of season four; as he tried to find out who he was as a man, husband, son, and father, he relied on the Native American tradition of a vision quest to help clear his mind and let him see what truly exists beneath the surface.

The quest was a focus of the finale of Yellowstone’s fourth season as we saw him toy with painful revelations and visions that terrified him. He had a lot of pain to work through, and he became a changed man from the experience.

After his vision quest, Kayce tells his wife that he saw “the end of us,” and an audible gasp could be heard ’round the world. From the vision of his late brother Jamie to that glimpse into a life with Avery, Kayce was being pulled in the most heartwrenching directions as he journeyed to discover who he really was, asking for help in the form of a vision.

Kayce saw five visions during his quest, which were all extremely important in their own ways.

What did Kayce see in his vision quest?

Before starting his quest, Mo told Kayce that he must face devastation to find purpose, and as eloquently as he put it, it was still a painful thought for Kayce to reason with.

“You must stand on the cliff of death to understand your purpose in life. It’s the only place where you can see it.”

During his quest, Kayce stood upon the cliff of death in more ways than one, including seeing it right in front of his face. Across the three-day quest, Kayce first saw an owl. Next, Kayce saw painful visions of his time as a Navy SEAL; both experiences were emotional as they dealt with loss and, especially with the SEAL flashbacks, a pain that Kayce was trying to escape.

Kayce also saw a vision of his late brother, Lee, and while it started as a heartwarming experience, it quickly turned frightening. He saw Lee as he looked when he lost his life, covered in blood with a terrifying cloak of darkness hanging over them. He also saw an intimate moment with Avery, the young woman who has strong feelings for the husband and father. The two have never shared a moment like that in reality, but it stuck out to viewers that it was part of his quest.

Last, but not least, Kayce saw a woman in white who is said to stand for the wolf Kayce sees often; fans of the series will recognize that Kayce has actually talked to this wolf who appears to be following him around. The woman leads Kayce to two paths, a struggle he is already familiar with, and tells him she’ll help him pick the right one, but we don’t discover what that is just yet.

All in all, Kayce’s quest was an emotional journey, but we didn’t see a vital component of the quest that Kayce was on: we didn’t see what he meant by “the end of us.”

What did he say about his vision quest in the season five premiere?

Kayce’s saying that he saw “the end of us” weighs heavily on Monica’s heart in the season five premiere. Once they lose their baby boy, who they’d named John Dutton after Kayce’s father, Monica has something sitting on her heart. The couple sits on the porch together and talks about the loss of their child, having a funeral for him, and what it means to move forward from the now.

Monica has something she wants to ask Kayce, and she finally musters up the courage to ask him: she wants to know if he saw the loss of their child in his quest. Monica asks her husband if that’s what he meant when he said he saw the last of us. Cue the tears; they didn’t stop falling after that question. Kayce quickly assures her that it’s not what he meant, but there’s still a look of pain on her face.

“No baby, I never saw this. I have to choose the end of us; I’d never choose this.”

Hearing those words from her husband’s mouth was bittersweet for Monica. She knew that Kayce hadn’t seen their painful loss, but she also knows now that he has to make the heartwrenching decision to “end us,” when that moment comes. So just who is the “us” he’ll be ending, and in what capacity will it happen? We’re waiting on bated breath to find out.

The season five premiere of Yellowstone brought a lot of heartaches, but just enough of the good stuff, too; we only hope that the road looks up for Kayce, Monica, and Tate soon.