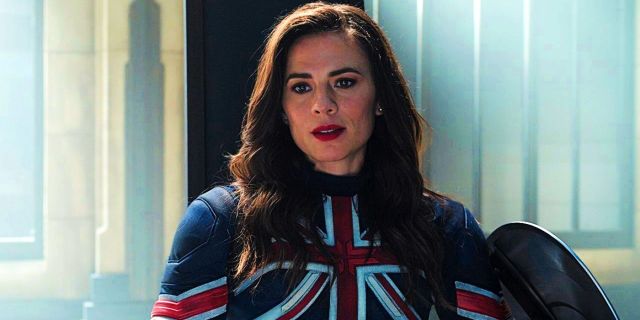 Scarlet Witch’s decimation of the Illuminati in Doctor Strange 2 rubbed fans up the wrong way as, while it was an awesome display of Wanda Maximoff’s unstoppable power, many thought it did those iconic heroes a disservice to have them suffer such an embarrassing defeat at the sorceress’ glowy hands. Captain Carter‘s demise was particularly ignominious, as she was chopped in half by her own shield.

It was a far cry from the adventures of the animated Captain Carter in What If…?, who managed to lead the Guardians of the Multiverse to protect all of reality from Infinity Ultron in the anthology show’s season one finale. Sure enough, the show’s EPs threw some shade on Multiverse of Madness‘ Peggy variant while hyping up What If…? season two at Comic-Con this Friday.

Director Bryan Andrews and writer A.C. Bradley appeared at Marvel’s animation panel and reflected on Carter’s cameo in DS2. They confirmed that Earth-838’s Peggy is not the same as the one featured in their series. In fact, they made it clear they consider the cartoon Carter to be a lot more capable than her live-action counterpart. “Our Captain Carter would have kicked Wanda’s ass,” they claimed.

Luckily for those missing the real Captain Carter, she’ll be back in What If…? season two. As teased in season one’s post-credits scene, her next storyline will offer a twist on Captain America: The Winter Soldier and reveal how Peggy encounters her own version of the brainwashed HYDRA assassin. Hayley Atwell will, of course, return to voice the heroine. Another episode we know is on the way is a spin on the Marvel 1602 universe — a Elizabethan reality from the Neil Gaiman comic of the same name.

What If…? season two is scheduled to hit Disney Plus in early 2023. A third season has already been greenlit.