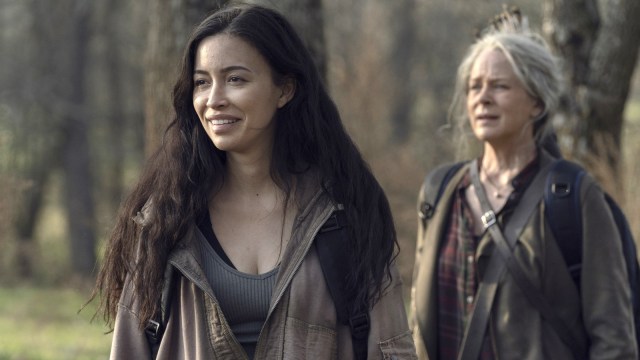 Image via Josh Stringer/AMC
Review of:

After a mega-sized final season that’s unfolded over the past 15 months, The Walking Dead finally reached the end of its long, lumbering stroll this past weekend. Sure enough, the show died as it’s always lived, by killing off a bunch of its ensemble cast.

As expected, the majority of the most popular characters survived intact so that their journeys can continue in the various spinoffs AMC has planned. Not everyone was so lucky, as one of the series’ longest-lasting heroes finally bit the bullet—or, more accurately, got bitten by a zombie—in the final episode. Yes, Rosita didn’t make it out of the finale alive, devastating fans in the process.

How did Rosita’s death unfold?

TWD episode 11 of season 24, “Rest in Peace,” focused on the pandemonium that was unleashed once a zombie horde invaded the Commonwealth’s lower wards, as redirected by the callous Governor Pamela Milton (Laila Robins). One last battle against the Walkers played out on multiple fronts, taking the lives of several familiar faces along the way, including Luke (Dan Fogler) and Jules (Alex Sgambati). The biggest death of the finale, though, has to be the demise of Rosita Espinosa.

Rosita’s last arc on the show involved her trying to find her missing daughter, Baby Coco, something she finally achieves in the finale. After liberating Coco and other kids from a children’s home, Rosita flees from the Walkers along with Eugene (Josh McDermitt) and Gabriel (Seth Gilliam). Then she falls off a pipe into the hungry horde with Coco in her arms, but in a true “punch the air” moment, the badass mom emerges victorious from the slew of zombies.

Tragically, however, this is not as much of a miracle as it seems. Although she protected her daughter and fought off the Walkers, Rosita confides to Eugene during a later moment that she had been bitten on the back. In a rare and perfect moment of peace for the survivors, Rosita spends her last few hours with her friends at a group dinner celebrating their escape. “Everything’s perfect. I just want to remember this moment,” she tells Gabriel before admitting the truth to him.

Ultimately, after saying her goodbyes to Gabriel and her daughter, Eugene stays with Rosita as she dies. “I’m glad it was you in the end,” she says before passing, putting a cap on their ever-evolving friendship that went from unrequited crush on Eugene’s part to a mutual platonic love.

As for how this ending came about, actress Christian Serratos confirmed to EW that giving Rosita as moving and dramatic an ending as possible was her own idea. “I know it sounds so dark, but I feel like the show, we owed it to the fans to break their hearts one last time, if that makes sense,” she said when explaining her reasoning.