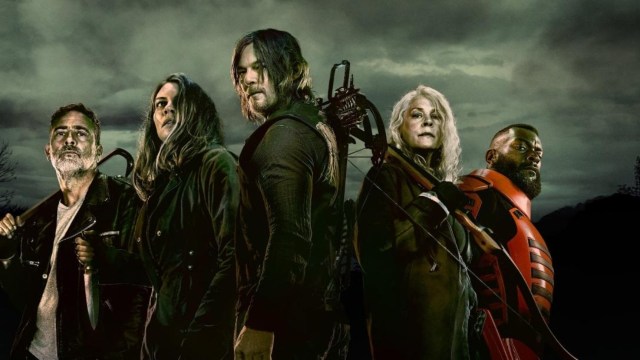 Warning: This article contains spoilers for the series finale of The Walking Dead.

The Walking Dead has aired its final episode, and while the universe isn’t coming to a close, things are changing significantly as we lose the heart and soul of the storyline.

Sunday, Nov. 20, was the last time we’d sit around our televisions and anticipate the story of The Walking Dead, at least as we know it now, so fans savored each moment as the end unfolded in front of us. While there were moments of valiant effort, bliss, and joy — there were also moments of heartache when we thought the tears would never stop falling. We had heartbreaking goodbyes to say, tearful farewells to characters we hoped would survive despite the odds.

On the finale special for Talking Dead, Angela Kang began speaking that the big wrap-up was the family story and the overarching tale we’d been watching for 12 years. It was an honest and authentic way to pause the story as we knew it and to allow a new one (or several) to begin.

Before they begin, some stories had to end, and they were emotional, so let’s say a final goodbye to three losses that broke our hearts but told an essential part of the continued story.

Jules was killed early in the episode, and as she was torn from Luke’s arms and devoured by walkers, we cried. Their journey had been intense, and we knew characters would have to die in the episode, but it wasn’t easy to send any of them off. She was a well-liked character, an essential part of the story, and someone it was sad to see go.

Luke’s death made us cry harder than we anticipated; we loved him as a character, but how he died truly made it an emotional scene. He was losing blood, surrounded by loved ones, and there was so much he wanted to say but couldn’t. He used his strength to point at his pocket where he had his harmonica; everyone smiled and let him know that they’d continue playing music in his honor and never let his memory fade.

We have to be honest, we would have been fine without any major character losses in the series finale, but we knew that was a dream too good to be true. So when Rosita showed Eugene that she’d suffered a bite as she fell off of the building during their struggle, we immediately began crying.

As Gabriel prayed over Rosita, promising that they’d be together again one day, we barely held it together. They’d built a family together, one that they were both proud of, and it seemed unfair for it to have to end.

Eugene stepping up and saying goodbye next was heart-wrenching, too. He loved her once and loved her still — maybe not in the same capacity, but to the degree that changed him. He thanked her for that as they said their goodbyes, Rosita telling him it was glad it was him at the end.

Rosita passed away next to her baby, which was the most heartbreaking moment. She wanted a few moments left with her baby; the reason for her to continue carrying on and to see her as a mother losing a future with her child was just — heavy.

In a flashback a year later, Eugene has a baby named Rosie, and if that didn’t cut us really deep, well, let’s just say it did. It was a way to honor what we lost in Rosita and to allow her to live on.

Of course, in addition to the deaths, we also had a lot of love and heartache in the finale. The characters who survived got a second chance at life, and it was because of their drive and determination. They rebuilt their home, Ezekiel became the governor with Mercer at his side, and Daryl and Carol had a beautiful goodbye as we learned he was a cowboy out on the hunt for Rick and Michonne. While they survived, their goodbye was heartbreaking; it was still an end to this story, so happily ever after didn’t play out even in the ways that they continue on.

Negan and Maggie had their necessary conversation, with an apology finally falling from his mouth, and it was a conversation that would ultimately change things for both of them, though we’ve yet to see just how much. That’s a story for their upcoming series, and we can’t wait to see what leads them to explore new territory together.

As a whole, they didn’t let the dead kill them, but more importantly, the family they became didn’t let the living break their spirit. That was the most important idea of all, to survive the living, and to do so with their belief in the future still intact.

For those we lost along the way, tonight and in the 177 episodes across the series as a whole, you’ve all carved a special place in our hearts, and we won’t ever forget that our Sundays belong to the dead. For those who survived, for those who fought the good fight and won, we won’t ever stop rooting for you; “This is how we survive, we tell ourselves we are The Walking Dead.“

As Carol told Daryl when they said their goodbyes, “We’re allowed to be a little sad,” and yes, we are; and still — we smile. Here’s to The Walking Dead.