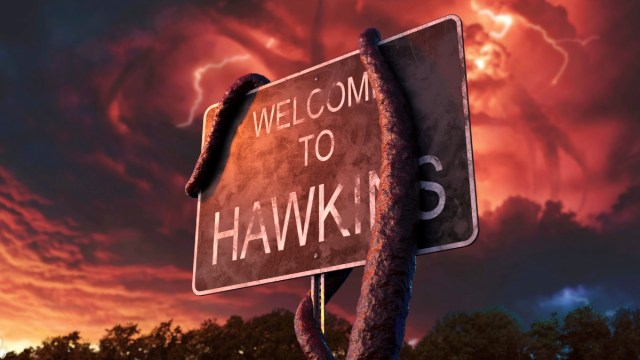 Warning: There are Spoilers ahead for Stranger Things season four volumes 1 and 2.

It can be stated with certainty that there is a fair level of familiarity with TV series and movies whose popularity is based on a murky portrayal of small towns. Whether it is the vampire- and hybrid-laden streets of Mystic Falls or the cursed alleys of Shadytown, towns acquire a unique identity of their own as well as become entities in their own right as a result of a plethora of activities — be it romance, conspiracies, or mishappenings — that occur within its geographical and social space.

David Lynch, in his popular works Blue Velvet and Twin Peaks, has shown how the glossy, consuming and stunning visuals of small towns like Lamberton and Twin Peaks have unfathomable evils lurking behind closed doors. Stranger Things’ Hawkins aligns with a literal representation of evil — in the form of a spooky Upside Down — that is located underneath the town and is commonly regarded as the “other side.”

The apocalyptic prediction of Hawkins in season four is delineated in the climactic denouement of the series where the town’s possible destruction is implied, thanks to the successful accomplishment of Vecna’s plans in opening all four gates to Hawkins with the ultimate goal to wage a war against the town, its residents, and humanity in general.

Based on the ultimate episode that showed signs of Hawkins’ invasion by Vecna, there are quite a few speculations that can be made about the town’s uncertain future.

What does Hawkins represent?

Season one introduces the viewers to the cozy and desolate town in Indiana only for it to transmogrify into a nightmare after the abduction of Will Byers (Noah Schnapp) and his confinement in the Upside Down.

Soon, the adventures embarked upon by our favorite characters exposed the presence of an evil element in the series in the form of Hawkins Lab with Dr. Martin Brenner (Matthew Modine) as the senior scientist of the lab who was running a racket of scientific experimentation on kids with supernatural abilities. Eleven (Millie Bobby Brown) was one of them.

Later in the series it was made clear that the lab was not the only unsettling presence in Hawkins as the real threat emerged from the Upside Down, an alternate dimension of the human world populated by eerie vines, sinister bat-like creatures, and bloodthirsty creatures like Demogorgons that possessed a shared psychic connection via the Mind Flayer, the most powerful entity in the realm – who was later revealed to have been created by Vecna.

In short, the Upside Down is the residence of all things monstrous that have subjected the inhabitants of Hawkins to gruesome fates since the gate separating the two worlds was cracked opened by Eleven.

Interestingly, throughout the four seasons that are replete with stomach-churning deaths and intriguing misadventures ranging from being held hostage at Russian secret basements to conspiring against the mighty Vecna, Hawkins acquires relevance from the very active presence of its alternative realm.

The Upside Down is a replica of Hawkins in terms of the similar paths and positioning of the houses, centers, and schools, but lacks the presence of factors that give Hawkins the vibe and warmth in its relation with humanity.

These factors are the residents of Hawkins and their interactions adding to the drama — amidst the violent fights — including the adventurous protagonists of the series.  It is later revealed in the final episode of Season four that the replica of the town was created by Vecna for meeting its key objective to wipe out humans.

Thus, it can be speculated that this strengthens the metaphorical depiction of Hawkins as ‘good’ contrary to its evil twin that is the Upside Down constructed by the personification of Evil itself (Vecna). Hawkins is a representation of the good vs evil battle whose materialization we have witnessed throughout the series and continue to hope for in season five.

What is going to be Hawkins’ future?

The jaw-dropping ultimate episode of Stranger Things Volume 2 has hinted that the fight against the Upside Down and Vecna is far from over. The episode culminates in the confirmation about Vecna being alive which is substantiated by the crimson thunders and dust of the Upside Down amalgamating with Hawkins.

As this happens, the happy reunion between Joyce and Hopper; Hopper and Eleven, and Joyce and Mike with their respective families is put to a halt as the fear of a looming catastrophe bordering on apocalypse takes over their happy expressions.

Yes, the war is far from over and there are many possibilities regarding the future of the town and its residents. One of the theories can base itself on Montauk, a sci-fi horror concept created by the Duffer Brothers that they have verbatim copied from and applied in the series on numerous fronts.

Montauk is steeped in doom and horror once the vicious powers spread across the town like cancer. The assumptions about the catastrophic results for the town following the abduction of Will Byers in Montauk are explicitly described. The description of Montauk mentions that

“This cancer will manifest itself in increasingly bizarre paranormal ways. Electrical fields will be disrupted. Strange fungi will grow on structures and people. A heavy fog will drift in from the Atlantic. The temperature will plummet. Food will rot. Gravity will fluctuate. People will glimpse bizarre entities in their homes and businesses. There will be an escalating number of ‘vanishings.’ The entire town will become “haunted” – and in grave danger. If people can disappear… can an entire town?”

This is an assumption that Mike, Joyce, and Hopper jump at after discovering the supernatural aspect of Will’s abduction. However, this can be interpreted as the degree to which the Upside Down has the power to adversely affect the town.

Since the series has followed the concept on numerous significant fronts till now, there is a good possibility that Hawkins might undergo a rather horrific experience and clearly, this isn’t quite a pretty picture. The fate of the people — as per this theory — will depend on the main characters who have been fighting all along against the monsters to recover the people who had been abducted.

If there is a deviation from Montauk, then various speculations can also be made about Hawkins’ fate. Either there will be bombastic action sequences that will either unleash heavy damage on the town, leading to Hawkins being either reduced to an uninhabitable space or rescued from its state of perpetual subjection to misery and dangers for good. The town would either be totally or partially consumed by the lurking evil or the ‘good’ represented by Hawkins itself would achieve the ultimate victory. Let’s wait and see what season five has in store for us and till then let’s seek comfort in possible speculations.