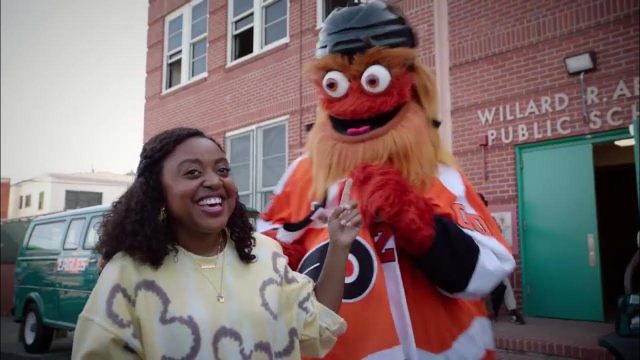 Season 2 of sitcom Abbott Elementary started off with a bang, much like how season 1 finished up. The critically acclaimed show that has taken over houses throughout America started its second season with a very special guest star. Janine Teagues, played by Quinta Brunson, wanted to do the best that she could to help make her students feel motivated and excited to start the brand new year.

Janine is known for all of her energy and positivity, so she brought in a mascot to cheer the kids on. Principal Ava might have had the most fun out of everyone there. The mascot is an orange, odd-looking, creature that resembles the Cookie Monster or some other muppet. Following the reveal, fans are wanting to know who exactly this mascot is.

Who is the mascot Janine brought in?

As fans of the show know, Abbott Elementary takes place in Philadelphia, one of the most historic cities in the world. One thing that is clear from the show is how much the characters enjoy sports, with there being constant references to Philadelphia sports teams. One of the teams based out of Philadelphia is the Philadelphia Flyers, a hockey team.

The mascot of the Philadelphia Flyers is named Gritty and is the mascot that Janine brought in for the kids. Gritty was first revealed as the mascot for the Flyers back in 2018 and has been one of the most famous mascots in all of sports ever since.

Gritty even has made an appearance on WWE. There is a chance that this will not be the only time that a mascot from a Philadelphia-based team is brought in. The Philly Phanatic, mascot of the baseball team Philadelphia Phillies, was the inspiration for the design of Gritty. The Phanatic is also known for his fun loving personality, and will more than likely be involved in the show at some point. This is especially likely due to the success of the Philadelphia Phillies this season.

There is also a chance that the Philadelphia Eagles and 76ers mascots might also appear in Abbott Elementary. The show has made a point out of to referencing Philadelphia sports teams many times during the show, so fans should get used to the idea of a mascot or even players making cameo appearances.