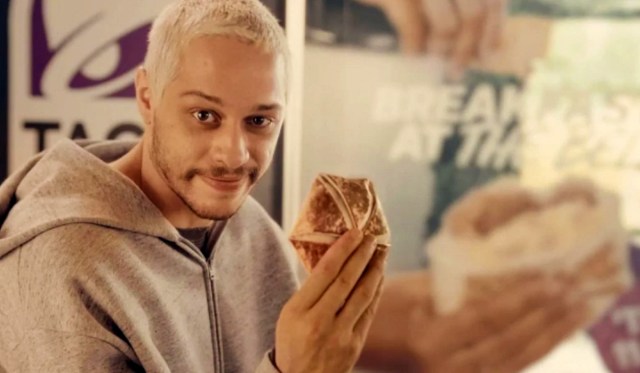 Known for his tumultuous relationships with A-list celebrities — including the reality TV queen Kim Kardashian — SNL comedian and actor Pete Davidson has failed to acquire a positive response from fans and audiences for his recent Taco Bell advertisement.

On October 3, Taco Bell collaborated with Davidson who was labeled as the “brand apologist” by the Mexican-inspired fast-food chain. This role and the ad saw Davidson apologizing for some of the strange food items that it was serving the customers in the past. Some of Taco Bell’s misgivings in this respect include the Waffle Taco and Naked Egg Taco of 2014 and 2017, respectively. On the subject of the fast-food chain going too far with their menu, Pete said in the ad,

“Sometimes we go too far. I have — and that’s why Taco Bell has hired me to make an apology for them. Go ahead, say you’re sorry! Taco Bell went a bit crazy with its breakfast. It was a bit too much. What you need in the morning is tasty simple food, coffee, and eggs.”

Speaking on the subject of the revamped morning menu of Taco Bell, he further added,

“I like to think I might be the muse behind Live Más, which is probably why they brought me on to apologize for their maybe-too-extreme innovations in the mornings. Taco Bell got too caught up with today’s hustle and forgot people like to ease into their morning with tasty, simple food. Here to stay are delicious burritos and Crunch-things or Crunchwraps or whatever they’re called”.

However, the ad didn’t go well with Taco Bell fans, who resorted to almost every online and social media space to express their resentment. Twitter and Reddit, in particular, are overflowing with vitriolic attacks and scathing remarks about the popular fast-food chain hiring a Staten Island native and a comedian for their ad campaign.

The issue is believed to be not entirely about hiring Davidson but the frequency of the commercial to which the audience was subjected. However, this hasn’t stopped the deluge of hate comments that the SNL star continues to receive online. Most of the posts are airing their grievances about the nature of the campaign and hiring Davidson for the purpose of an official apology.

One of the subreddits r/LivingMas — a self-proclaimed mega fan of the chain — published a post stating their disappointment about the ad. The post is called, “Taco Bell Kindly Take Away the Pete Davidson Ad”, and conveys the impression that some of the biggest fans of the chain are not happy about the ad and want it to discontinue. It says,

“I’m a super hardcore TB fan (which is why I’m here lol) but even then the Pete Davidson ad with him talking with his mouth full is absolutely repulsive and makes me want to not eat there. I’m not sure what some women see in him but he is so gross to me personally…. Definitely not a selling point for any product. Anyone else feel the same?”

“I’m so freaking sick of it. Like idc about him but just seeing the ad so many times makes me hate him when I have no thoughts or care about him in the first place”.

There are also quite a few posts on Reddit that underline the continuing bitterness that the audience has for the ad.

Scathing remarks were made about the ad and it was associated with disruption of sleep and peace.

Others hated the commercial way too much and went to the extent of actually blocking the page.

It is certain that the strings of backlashes are contributing to the immense unpopularity of one of the greatest fast-food chains in the world. While it’s been too long to undo the damage, the incident can at least be a yardstick against which every commercial can be measured.