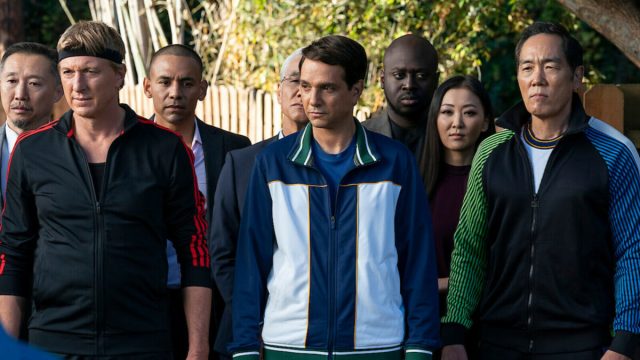 This September sees Cobra Kai karate-kick its way back onto screens for its fifth season. After its first couple of seasons debuted on YouTube Red, the Karate Kid spinoff series has become one of the biggest TV shows on streaming since Netflix took the reins, so the hype for the incoming season five is arguably higher than ever before.

But now that it’s been going for half a decade — which translates to extreme old age compared to most of Netflix’s notoriously short-lived output — fans may be wondering if this new batch of episodes will see the adventures of Johnny Lawrence (William Zabka), Daniel LaRusso (Ralph Macchio), and their students start to wind down.

Thankfully, we can safely say that season five isn’t the final one, given that Netflix would surely market it that way and Cobra Kai‘s enormous success means it’s unlikely to be unceremoniously cancelled. At the time of writing, however, a sixth run has yet to be officially greenlit. However, we have received an encouraging update from a very reliable source.

Is season six a sure thing?

Again, while Cobra Kai season six hasn’t been announced so far, it looks like we can safely say it’s going to happen. Back in July, EP Jon Hurwitz — who is part of CK‘s triumvirate of showrunners, alongside Hayden Schlossberg and Josh Heald — was asked on Twitter if the series is now “close to the end” and if there are “many more years” still to come.

Hurwitz was careful not to get too specific in his response, but his comments should cause Cobra Kai diehards to sigh with relief. “All I can say is that we can expect more Cobra Kai to come and that the Miyagiverse is far from finished,” he wrote.

According to what Hurwitz has to say, then, fans don’t need to worry as it seems like the creators don’t have any plans to call it a day with Cobra Kai just yet.

So what’s next for the Miyagiverse?

This begs the question, then: what’s next for the Miyagiverse?

Well, for starters, there are certain things Cobra Kai has yet to tick off its to-do list. While Karate Kid Part III star Sean Kanan is set to return as Mike Barnes in season five, there are still a few key players from the films that have yet to reappear in the franchise. Most notable is Hilary Swank, who starred as Julie Pierce in The Next Karate Kid. The creators have maintained that they would love to have Swank on their show, so it’s easy to imagine Julie featuring in a sixth season.

Hurwitz’s use of the term “Miyagiverse” specifically also brings to mind the possibility of the franchise being expanded. Well, this isn’t the first time he’s teased such a thing as Hurwitz likewise revealed on Twitter — back in September 2021 — that “various” ideas for spinoff projects were being discussed. It’s unclear how those talks are going a year later, but with any luck at least one concept has been further developed.

It’s worth mentioning, though, that Hurwitz, Schlossberg, and Heald are extremely busy these days. In addition to continuing Cobra Kai, the trio are working on a Duke Nukem movie — based on the video game franchise — for Legendary Entertainment. Not to mention they’ll be giving another iconic ’80s movie the Cobra Kai treatment too — they’re creating a Ferris Bueller’s Day Off spinoff for Paramount.

In other words, any additional Miyagiverse projects may be a ways to go, but the odds are looking good that we can expect Cobra Kai season six sometime in 2023. And, if we’re really lucky, maybe we’ll even get a seventh season a year after that. The future of Miyagi-Do, Eagle Fang, and of course, Cobra Kai should become much clearer once season five arrives on Sept. 9 and no doubt provides yet another big viewership win for Netflix.