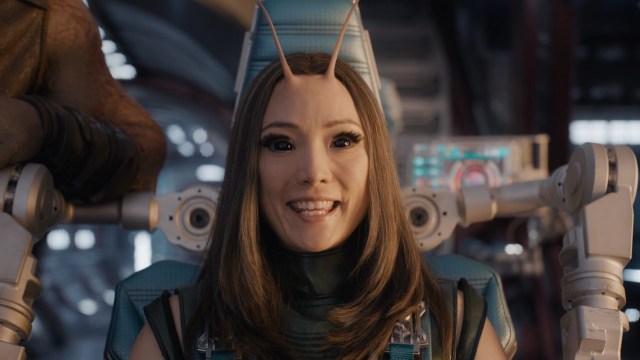 The Guardians of the Galaxy Holiday Special has been unwrapped on Disney Plus, and it’s a delightful – if very light – slice of Christmas cheer. The goofy plot sees Drax and Mantis attempting to make up for Peter Quill’s many missed Christmases in space by bringing him the perfect present: Kevin Bacon. Bacon, playing himself, isn’t best pleased to be transported to an alien city located inside a colossal decapitated head, but soon gets into the holiday spirit.

The special ends with a tear-jerking moment and oodles of festive spirit. Everyone involved seems to have had fun making this, but after the credits roll, there’s a tease that the Guardians of the Galaxy might not be done with Christmas just yet.

The post-credits scene sees Rocket and Cosmo the Spacedog decorating Groot like a Christmas tree. Groot shrugs off the tinsel and baubles, causing Cosmos to exasperatedly say “Groot ruined Christmas again!” Rocket looks at the camera and says “Now we got to have another special.”

We’ll next see the MCU’s spacefaring heroes in Guardians of the Galaxy Vol. 3 on May 5, 2023, with that film expected to round out the trilogy and conclude some of these characters’ stories. But, at least based on this comment, it sounds like we may well get another Holiday Special in 2023. Or, at the very least, some kind of future one-off is on the cards.

There’s mention of Easter in the special, so perhaps we may get one more quick Disney Plus adventure from the heroes for that holiday just before we head into Vol. 3. We don’t yet have any official announcements one way or the other, but it certainly sounds like something is going to be announced soon.