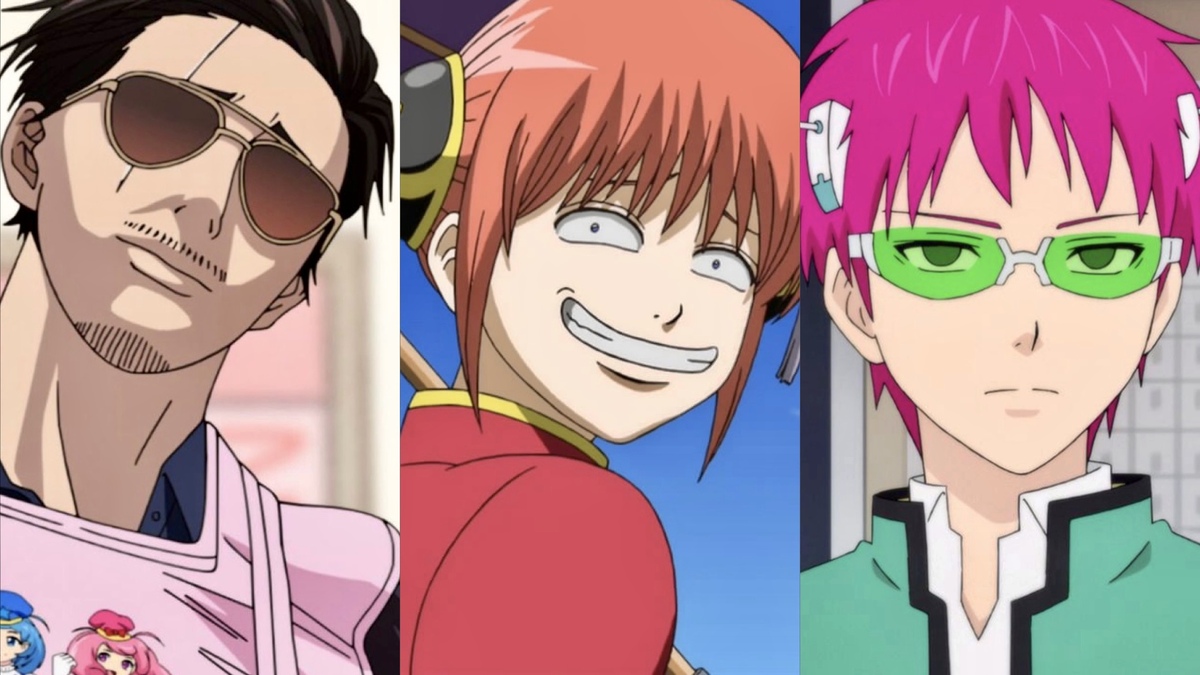 With anime being one of the most enjoyed media formats for many, it’s little wonder why the comedy sub-genre has become a fan-favorite. With so many avenues to explore—sci-fi comedy, action-comedy, fantasy, and the most popular slice of life—comedy anime rarely holds back, with free reign of voice acting, and the ability to create unique worlds and hilarious characters.

With so many to choose from, here is a ranking of the 10 best comedy anime around, some of which can be binged through in a few hours or days, and other longer ones that will keep you laughing for weeks or months.

To many native English speakers, the comedy in anime is much different than the ones provided in their everyday cartoon and animated programs. That being said, for the most relatable anime that hits close to home, Ouran High School Host Club is the perfect fit. The comedy follows the lives of a brilliant androgynous girl, Haruhi Fujioka, who is indebted to the rich boys of a host club after breaking a very expensive prized vase. To pay off her debts, she joins the host club and makes some wonderful friends along the way. There’s humor, romance, and drama in this beloved short-lived anime, and it’s a perfect binge for those looking for some lighter laughs and some absolutely charming characters.

9. The Way of the Househusband

One of the most hilarious anime releases of the new decade, The Way of the Househusband follows a retired member of the yakuza, Tatsu, who has dedicated his new life to catering to his wife, and carrying out chores at home. Tatsu is undoubtedly the heart and soul of this series, and even though he still evokes fear in the hearts of rivals, policemen, and passers-by, he’s only really interested in learning new recipes, and couldn’t be bothered with the gangster life anymore. The contrast between Tatsu’s past and his present makes for some really funny scenes, and the supporting characters all add an element of charm to the story.

Venturing into the romantic-comedy genre, and expertly knocking it out of the park, Kaguya-sama will have you laughing out loud on numerous occasions. The story follows the student council president Miyuki and his deputy, Kaguya, two extremely proud students who are absolutely smitten by each other. However, due to their enormous egos, the pair have refused to admit their love for one another, and have instead decided to scheme their way into getting confession. Whoever’s the first to admit they’re in love loses.

Terribly underrated, but highly appreciated by its fans, Asobi Asobase is targeted to younger audiences, but still manages to get a kick out of viewers of all ages. The story follows the lives of three middle school girls who each have distinct personalities but build a unique friendship by creating their own club called “The Pastimers Club”. As they spend their individual time interacting with other students and teachers, laugh-out-loud moments occur with every passing scene. With only 12 episodes, Asobi Asobase offers some of the funniest writing to cheer anyone up.

Another grossly underrated gem, Baka and Test delivers slapstick comedy without being over the top or annoying. Set in Fumizuki Academy, a school where your grades determine your comfortability, the students of Class-F craft up a less-than genius plan to battle their way to defeat every other class up to Class-A, and receive all their luxurious amenities. All the classic comedy anime stereotypes are on display here, but it somehow works, and is a bowl of fun for anyone looking for some belly laughs. Another major perk of Baka and Test is that the English dub is also phenomenal!

When Iori Kitahara moves near the waters to enjoy a fun new adventure at college in Izu city, he is roped into the hilarious adventures of the alcohol-loving scuba divers that frequent his uncle’s shop. The anime is a wonderful and hilarious slice-of-life about adapting to new environments, and building unlikely, worthwhile friendships.

As the name suggests, this anime follows the daily lives of friends in school, and while that might not sound like much, Daily Lives is absolutely comical and will leave you in stitches. The interactions friends Tadakuni, Hidenori, and Yoshitake have with other students, girls outside their school, teachers, and townsfolk, are always bizarre in some way or another.

With a unique art style, and some of the funniest written scenes in anime overall, Nichijou is another slice of life offering that follows the residents of Tokisadame town, particularly childhood friends Mio, Yuuko, and Mai. There’s also a robot and a talking cat, and while on paper, none of this should work, Nichijou works a little too well. From the mundane occurrences, to the absolutely insane, there’s no telling what to expect with this show.

2. The Disastrous Life of Saiki K.

Protagonist Saiki is unlike anyone around him. He’s a psychic youngster with a deadpan delivery and little interest in the exciting things life has to offer. Instead, he’d rather lead a quiet life and keep his abilities to himself. But things don’t ever go Saiki’s way because he’s surrounded by some of the most eccentric, hilarious, and troublesome students and townsfolk — including his parents. There’s hardly a sane day where Saiki can be alone with his own thoughts, but it translates into some of the finest comedies ever. One of the most popular and acclaimed comedy anime, The Disastrous Life of Saiki K. is simply exceptional.

Widely considered by many to be the most hilarious anime of all time, Gintama is a show that just shouldn’t work on paper. The long-running anime which ended in 2021 after over 300 episodes, follows the life of Gintoki, a feudal samurai who has to pick up a series of odd jobs to survive since his country has been invaded by aliens. He is joined by Shinpachi, a samurai student, Kagura, a young girl with superhuman strength, and a giant dog named Sadaharu, and together, their adventures lead them all over the country, having some of the wildest interactions with the most hilarious characters ever.