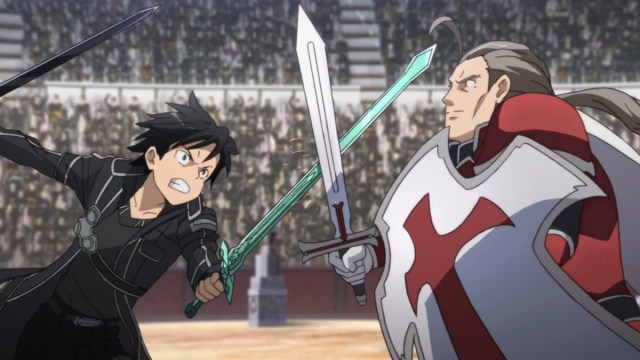 World-famous novel-turned-manga Battle Royale, written by Koushun Takami and illustrated by Masayuki Taguchi, was released onto bookshelves back in 2003. However, in an ironic twist of fate, while Battle Royale itself was never adapted into an anime, its birth nevertheless inspired the creation of many survival game anime, such as the popular shows Sword Art Online and Future Diary. That being said, not all survival game anime is created equal, and you don’t want to waste your valuable time watching a dud.

To save you time and effort, we’ve done the work for you, compiling a list of the seven best survival game anime of all time. Let’s hold onto hope that one of these days we can add a Battle Royale anime adaptation at the bottom in first place, so let’s all do our best to survive to see that happen!

Short 2014-2015 anime Alice in Borderland — based on the manga by Haro Aso — introduces us to apathetic protagonist Ryouhei Arisu and his two friends, who are inexplicably transported to a strange place called the “Borderland.” There, they’re forced to participate in a series of games, with the warning that failure will mean their deaths.

The survival games in Alice in Borderland take place within a parallel, post-apocalyptic world inside strange rooms, and require skill at playing card games. Players are killed when their life “visas” expire or if they refuse to participate. At the game’s end, two players must survive to press the two buttons that will allow them to clear the game.

Despite the danger presented by the survival game, Ryouhei finds himself feeling more alive in it than he has in the outside world in a long time. Players who fail are shot by a mysterious man wearing a horse head, so there’s a lot at stake for contestants in Alice in Borderland.

Blood is a big deal in 2012 anime Deadman Wonderland — adapted from the manga by writer Jinsei Kataoka and illustrator Kazuma Kondou — especially since the unique abilities that exist within the world it depicts are totally blood-reliant. When protagonist Ganta Igarashi is accused of murdering his entire class after surviving its destruction by a mysterious “Red Man” who used its own blood as a weapon to do the deed, he is sent to a prison and amusement park known as “Deadman Wonderland.”

While there, Ganta is injected with a deadly poison every three days that can only be reversed by taking a candy drug antidote that prisoners at Deadman Wonderland can purchase with Cast Points, and winning these requires their participation in dangerous survival games.

Aided by a mysterious girl named Shiro, Ganta survives participation in one of these games. However, when his “Deadman” power is discovered, revealing his ability to use blood as a weapon, he is upgraded to participation in the popular “Carnival Corpse” gladiatorial matches.

Just so you know, Deadman Wonderland isn’t shy about showing particularly gruesome deaths, so it’s not a good fit for the faint of heart.

Anime Future Diary — inspired by Sakae Esuno’s corresponding manga and airing from 2011 to 2013 — ups the survival-game stakes a notch by including godhood as the grand prize of winning. This death match is seen primarily through the eyes of contestant Yukiteru (“Yuki”) Amano, accompanied by savior and stalker co-contestant Yuno Gasai. Future Diary‘s survival game is set in motion by Deus Ex Machina, the God of Time and Space, who is seeking a replacement before his impending death destroys the universe, with the 12 selected players competing for the role.

Each player is allotted a Future Diary, a modified version of their phone that can predict portions of the potential future, and which is unique to the type of person they are. When a participant’s Future Diary is destroyed, its owner dies, a fate each contestant tries to avoid whenever the message “Dead End” shows up on their phone, signaling that another player is on their trail. Also, in this survival game, the future can be changed, but since everyone gets information about possible futures on their phones, it’s ultimately up to their distinct abilities and personality whether they make it.

Interestingly, in Future Diary, the survival game takes place in the outside world, while participants continue to live their ordinary lives.

Sadly, Junya Inoue’s Btooom! didn’t really get the attention it deserved, with only one anime season being produced to air in 2012, leaving the rest of the manga’s story unanimated. The season begins with Ryota Sakamoto, a top-level player of strategic, grenade-based video game Btooom!, waking up on an abandoned island with no memory of how he got there. He soon finds out that he and 29 others were kidnapped and flown there by Btooom!‘s sociopathic game creator to participate in a survival game modeled on Btooom!, after having been nominated by people from their past lives.

To win the survival game in Btooom!, participants must collect seven chips, crystal shards embedded in each player’s hand that also act as sonar devices capable of detecting anyone who’s moving within a certain radius, by killing their owners before they can be allowed off the island. Therefore, only four players will be able to make it out of Btooom! alive. The weapons allotted to each contestant consist of BIMS, the grenades from the corresponding video game.

The players quickly split into teams to maximize their survival odds. There’s no food or water on the island, so in order to collect the supplies that a mysterious helicopter occasionally drops off, the participants must find a strategic way to get these resources without being ambushed.

In Btooom!‘s manga, the final showdown is split into two possible endings and takes place in two separate locations, with three allies from the outside world taking on the evil organization sponsoring the game and Ryota (along with his teammates, including female lead and love interest Himiko, in one version) taking on the last combative player and his boyhood friend-turned-enemy, Nobutaka Oda.

Owing its creation to a popular, ongoing webtoon by Lee Jong-hui, anime Tower of God revolves around protagonist Baam and his foil, Rachel, who has her sights set on reaching the top of a tower that will grant the climber their heart’s desire upon successful ascent. To do this, it’s necessary to participate in a series of challenges on each floor. Not wanting to be separated from his friend, Baam follows Rachel into the tower and begins his own climb.

Although players can die in Tower of God‘s dangerous and difficult games, not many actually have so far in the story, including in the webtoon. However, abandoning the climb or failing a test causes contestants to be returned to wherever they came from. Also, after having reached a certain level, players can sometimes retake tests after failing. Although the challenges taken on do risk the contestants’ survival, the point is for the winners to reach the next level, not for most participants to die in a winner-takes-all scenario. After all, they are participating in the tower climb, along with its challenges, of their own free will to achieve a dream.

However, some competitive contestants, such as Rachel, are willing to play dirty to reach the tower’s top and the dreams it promises to yield, which includes a readiness to kill. So far in Tower of God, it really seems like she has it out for Baam, having pushed him to what was supposed to be his death, at least as far as we know.

Although Sword Art Online‘s 2015 sequel, Sword Art Online II, doesn’t involve the run-of-the-mill type of survival game from the previous season, protagonist Kirito does find himself entering a game of survival in virtual-reality game Gun Gale Online. After an unknown masked figure going by the name “Death Gun” starts to target popular players of Gun Gale Online by shooting their avatars through a video screen — which somehow coincides with their actual deaths in the real world — Kirito is recruited by the government to enter the game undercover to investigate.

While allied with fellow-player Sinon, Kirito soon engages in a successful, virtual face-off with the mysterious entity during Gun Gale Online‘s gun-battle tournament, but it turns out that the battle isn’t just virtual. It just so happens that Death Gun is an enemy from Kirito’s past, and has been stealing rival players’ personal information and sending his goons to break into their apartments to kill them. Sword Art Online II concludes with a life-or-death struggle in the real world as one of Death Gun’s accomplices breaks into Sinon’s apartment.

Based on a light novel series by Reki Kawahara, anime series Sword Art Online revolves around virtual-reality video games that allow players to feel like they’re actually in the game. This is made possible by NerveGear “helmets” that can manipulate a player’s brain.

In Sword Art Online‘s 2012 first season, villainous game-creator Akihiko Kayaba decides to trap players in his newly released Sword Art Online virtual-reality game by eliminating the logout function, trapping protagonist Kirito and female lead and love interest Asuna, along with thousands of other players, inside. To leave the game and preserve their lives, the players must defeat all 100 floors of Sword Art Online‘s virtual world, Aincrad, with their final victory culminating in defeating the final boss on the top floor. If they die in the game, they’ll also die in the real world, with the Nervegear “helmets” set to fry their brains if anyone tries to remove them.

With this grim reality in place, Sword Art Online‘s kidnapped players team up into guilds, working together to win important items, improve their skills, and defeat monsters, with the final boss of each floor serving as the biggest challenge to overcome once the “boss room” is discovered. However, while the purpose of this survival game isn’t to kill other players, but for as many as possible to reach the final floor, some guilds become murderous gangs intent on stealing items from others. Therefore, by the end of Sword Art Online‘s season, many players have been killed by other players, virtual monsters, or their own hand.

Interestingly, the survival game in Sword Art Online doesn’t reach its planned conclusion on the much-anticipated 100th floor. Rather, it’s on the 75th floor (during a boss-room battle) when Kirito realizes that another player is actually Akihiko Kayaba in disguise. The final showdown consists of a duel between Kirito and the game creator, with the lives of the remaining Sword Art Online players on the line.