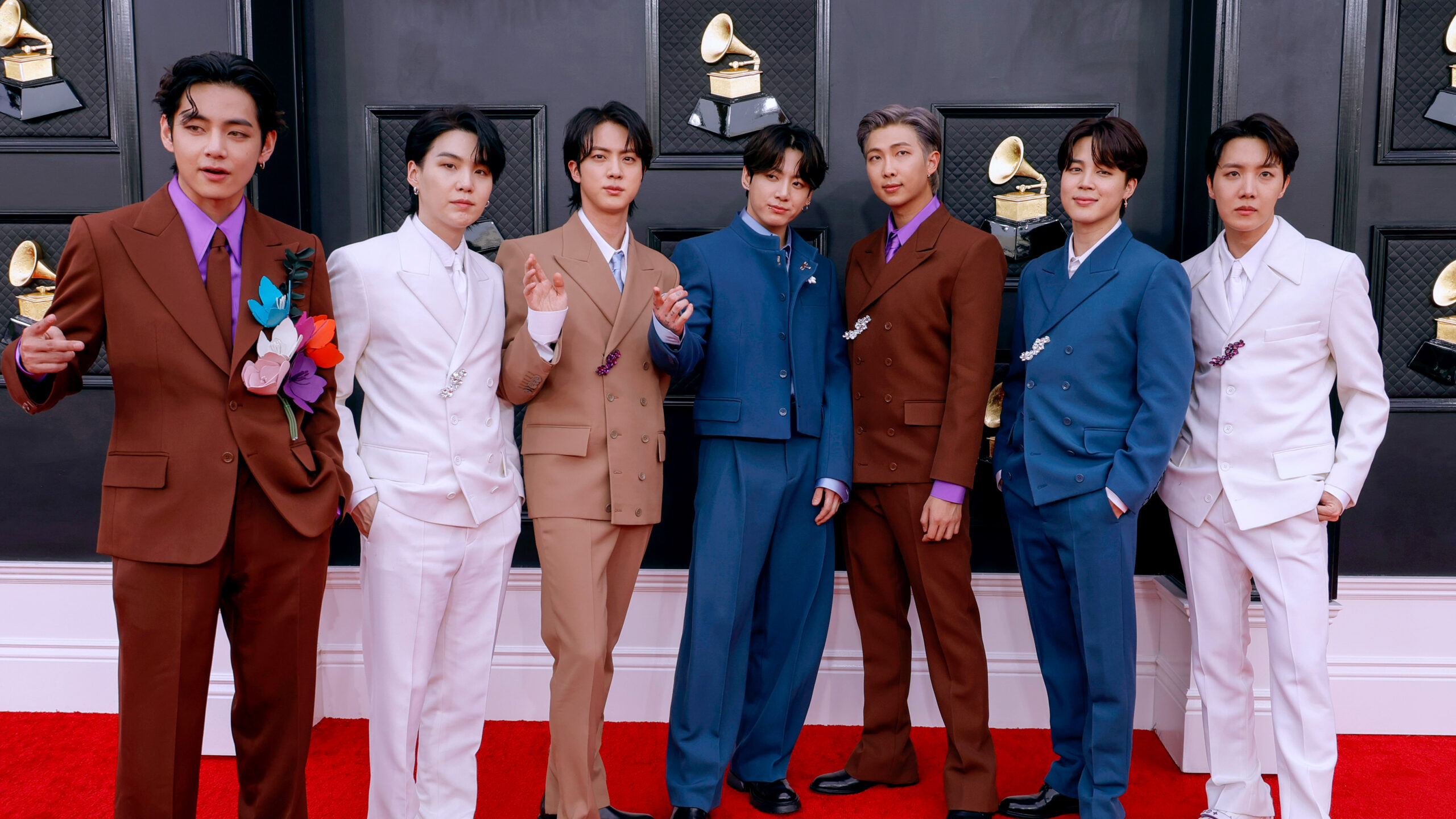 Korean boy band BTS are arguably the biggest global celebrities of our time, having completely taken the world by storm over the past few years. But, after all, what is their net worth?

BTS’ success is undeniably historic. They break records in their sleep, all supported by one of the largest fan groups in the world – the BTS Army. The Korean 7-member band are the most listened to group on Spotify with 37 million monthly listeners. When their Grammy nominated smash-hit Butter dropped, it broke the record for most streamed track on Spotify and most watched music video on Youtube in the first 24 hours. By the end of 2021, BTS held a total of 25 Guinness World Records.

But, BTS don’t just make history as a group. Each of the band’s individual members – RM, Jin, SUGA, j-hope, Jimin, V and Jungkook – have made a name for themselves as giants of the music industry. Most recently, Jimin’s song With You broke the record for fastest song to hit number one in 100 countries. RM’s solo mixtape mono. holds the record for most number ones on iTunes, topping a whopping total of 123 country album charts.

And this is just scratching the surface.

In the recent list for the 100 most influential companies of 2022, Time Magazine assigned the number one spot in its “Leaders” subsection to BTS’ label HYBE and its Chairman Bang Shi-Hyuk. The cover story about the achievement announced that “HYBE and Bang Si-hyuk Are Transforming the Music Business—With a Little Help From BTS”, which is honestly an understatement. HYBE, originally Big Hit Entertainment, were risking bankruptcy when BTS were formed, and through a mix of hard work, sheer talent, rare chemistry and a hint of luck, they ended up creating the biggest boyband in the world. Per the New York Times, BTS made up for 90% of HYBE’s sales in the first quarter of 2020.

So, what does this all mean when it comes to how much money BTS actually has?

According to online net worth calculators the Wealth Record and Celebrity Net Worth, BTS’ net worth, as a band, in 2022 ranges anywhere between $100 million and 140$ million. This is most likely selling the band’s fortune short. Let’s look at more trustworthy sources.

As per Forbes, in 2019, the band had a $50 million annual income. This was before they owned any HYBE stock (more on that later), and before their English-language hits Dynamite and Butter catapulted them to even greater global fame. That’s around $7 million for each member. Bloomberg reported in December of 2021 that just in HYBE shares alone, the band held equity valued at $165 million. That’s approximately $24 million for each member.

Add these two numbers and you will reach a $215 million net worth (approximately $31 million for each member). Members SUGA, RM and j-hope are likely to be the wealthiest of the group due to their individual mixtapes, as well as songwriting and producing credits within and outside the band. Websites also point out Jin’s restaurant business with his brother as an extra source of income for the senior member of BTS.

The thing is, BTS are absolute money making machines, which is a result of how hard they work but also of how creative their management is. For example, BTS don’t just tour – they usually stream their shows online for the entire world to see, for prices that can pass 50$/user. Their merchandise flow is also hard to match, with official products, compilations, DVDs and photo albums coming out in dozens each year. But, of course, only a portion of that revenue effectively makes its way to the artists’ pockets.

Regardless, it’s good to remember that these figures are merely conjectural. The man behind Celebrity Net Worth has said the figures on his website are simply “the best possible ballpark”.  It’s impossible to know exactly how much money a given celebrity has – privacy is a good thing – but there are a few indicators that help paint a picture of just how rich BTS could actually be.

According to Korea Times, BTS are paid from $2.69 million to $4.48 million for domestic endorsements. While there aren’t any numbers available for their global campaigns like Samsung and McDonald’s, their list of endorsements is so long it doesn’t take an expert to imagine the fortune they must make from brand deals alone.

This past December the members finally created personal Instagram accounts, with V being the most followed member at 40 million followers. SpeakerJ, a social media auditor, has recently calculated that because of his 32 percent engagement rate, V could earn from $64 thousand to $773 thousand every time he posts. BTS music videos alone rack up 25 billion views on Youtube (which doesn’t include performance videos and the thousands of extra materials the band releases on the platform). Additionally, HYBE created its own social network Weverse, which has 6.8 million monthly active users. On the app, ARMYs can also buy merchandise or pay for an official membership that grants them access to exclusive BTS content (the steepest membership package available at $150/year).

The band’s last complete tour before the global pandemic, amassed $196.4 million according to Billboard Boxscore. After hosting a few online concerts during lockdown (the biggest reaching almost 1 million viewers worldwide), BTS have recently returned to live shows. Permission To Dance on Stage made $33.3 million over 4 nights in LA. Add that to their 4 night run in Las Vegas and 3 shows in Seoul and the numbers become astronomic. Oh, and yes – they showed one of their Seoul shows in cinemas all over the world and made almost $33 million at the box office.

One of the most fascinating aspects of BTS’ world stardom is that they actually still sell physical albums. The K-Pop industry started the trend of turning albums into collectibles, cleverly beating the digital streaming threat. BTS had three albums on IFPI’s 2020 Global Album Sales Chart which combines physical and digital sales (MAP OF THE SOUL: 7 and BE at #1 and #2, and MAP OF THE SOUL: 7 THE JOURNEY at #8). As for streaming, sources aren’t airtight, but it’s estimated BTS are making around $24 million a year on Spotify alone.

BTS’ net worth took a huge boost when HYBE decided to go public in 2020, but not before gifting each BTS member with an equal stake in the company. As mentioned above, Bloomberg revealed that each member held HYBE equity worth almost $24 million at the time ($165 million total). It also reported that in December of 2021, members Jin, j-hope and RM all sold part of their shares, with details as follows: Jin, 16,000 shares worth $4.1 million; J-Hope, 5,601 shares worth $1.57 million; RM, 10,385 shares worth $2.75 million.

In March 2021, Jimin and RM each reportedly bought flats in Seoul’s luxury Nine One Hannam complex, worth $5.3 million and $5.7 million respectively. RM is also said to have made a profit of $800 thousand with the sale of his previous home. In 2020, Jin acquired a $3.4 million apartment, which he then gifted to his parents, and Jungkook bought a $7 million house in Itaewon. Reports on j-hope, SUGA and V’s real estate all date to before 2019 – the Hope World rapper purchased an apartment in 2016 in the Seoul Forest Trimage luxury complex, which was last valued at $1.9 million in 2019. SUGA allegedly invested $3 million in a Hannam Riverhill home in 2018, while V reportedly chose Gangnam for his $4.55 million purchase in 2019. Additionally, the members all share a $6.53 million home since 2017.

Calculating net worth is a complicated process, with each BTS member probably not even being aware themselves of just how much money they have in total. While the pandemic kept BTS from touring (one of their biggest sources of revenue), HYBE found other ways to increase cash flow: the band released an album and three mega-successful singles, they held a handful of online concerts, and announced brand deals with McDonald’s and Louis Vuitton. Their net worth also increased significantly when they were offered HYBE stock by their boss. As soon as COVID restrictions started lifting, BTS went straight back to live performances in sold out stadiums in the US and hometown South Korea.

There’s only one little thing looming in the distance: mandatory military service. This has been a major debate topic in South Korea, with some arguing that BTS’ contribution to both the country’s GDP and its global brand should be enough to exempt them, while others fear it could open a dangerous precedent. According to the Guardian, in 2020, the South Korean national assembly “passed a law allowing pop stars to defer their national service until they are 30, with the permission of the culture ministry,” most likely in order to preserve their healthiest physical years. With BTS’ members’ ages ranging from 24 to 29, they don’t have much longer until they have to put their careers on hold, which would, of course, not only decrease their net worth but also likely devalue HYBE stock.

For now, though, with the announcement that BTS’ 9th studio album will be dropping this June and their popularity at its peak, the band’s net worth is most likely to increase throughout 2022.