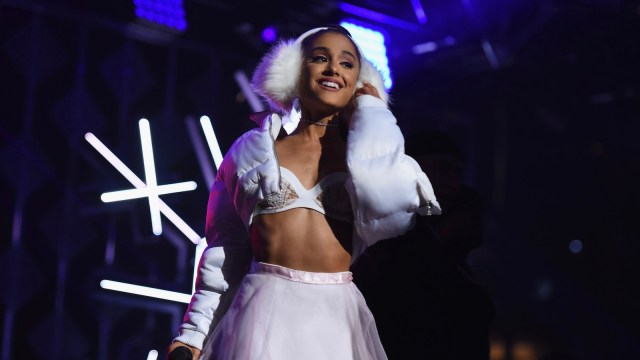 Ariana Grande just killed everybody else’s Halloween costume contest. The singer teamed up with her former Victorious co-star Elizabeth Gillies back in May for a spot-on perfect recreation of Christopher Guest’s legendary 2000 mockumentary Best in Show which they just shared today on their respective Instagram accounts, and the two knocked it out of the park.

The pair also lent their impressive impression chops to another couple featured n the film, played by Schitt’s Creek stars Eugene Levy and Catherine O’Hara as Gerry and Cookie Fleck. Gillies takes on O’Hara’s part with aplomb as the two recreate the hilarious “two left feet” sequence from the movie, but Grande practically disappears into her role as Levy. Even the most hardcore of Arianators would have to do a triple take to figure out it’s Ms. Grande herself under those impressive eyebrows.

Gillies completely shines though when she apes funnyman Larry Miller, as Max Berman, an ex-love interest of Cookie’s who quite obviously still pines for her despite the presence of his clueless wife Fay (played by Grande in the sequence).

Fans are going wild in the comments with statements like “Hands down the best thing I’ve ever seen.” and “Oh my God! So, so good. I need to see more!” but the pair’s effort got a great thumbs-up from fellow actor/singer Katy Perry who simply wrote, “can this get nominated?”

The performance prompted none other than Jennifer Coolidge to nominate herself, enthusing in a comment “This is f***ing great. I was gonna go as the young boy’s pet weasel from The Watcher but now I think I’m gonna go as @arianagrande’s dog Toulouse,” to which Grande replied, “@officialjencoolidge we thank you, we love you!!!!!!!!! and miss you so 💘.”

It may be the last time the busy friends will have to collab for a while. Grande is currently slated to begin working on the upcoming two-part film adaptation of the musical Wicked, while Gillies has joined the cast of the Tubi original movie Spread alongside Harvey Keitel and Diedrich Bader, and will also voice Catwoman in the 2023 animated movie Catwoman: Hunted.