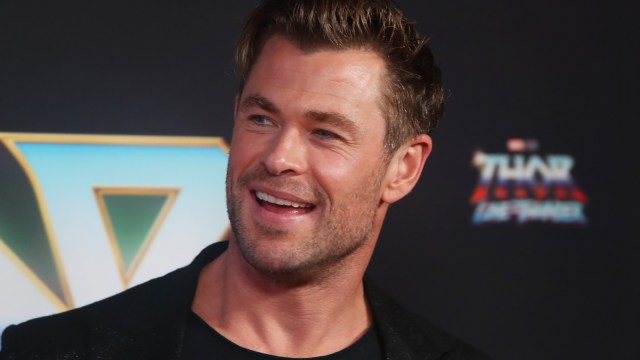 The People’s Choice Awards are upon us as the fans get to flex their muscles as they choose their entertainment winners for the year. Another person flexing his muscles is Chris Hemsworth, who is nominated for a few categories including Male Movie Star of 2022 and Action Movie Star of 2022 with his film Thor: Love and Thunder also up for a few awards.

The actor has some tough competition though in both categories, facing none other than The Rock in each. This is the battle of the brawn now with the two portraying some of the more ripped superheroes to be found on-screen. Hemsworth took a little time out of the day to share his thanks for the nomination, stating he was with some of the other nominees such as The Rock and Ryan Reynolds, though both look a little, how can we say… diminished than when we last saw them.

Of course, the Australian actor was not with either of them and was simply joking around with a few of his friends on a porch. He went on to add that this year it was “a full category,” humbly adding, “it’s a list of people who will most likely beat me. So I need your help and your vote.” He appealed to his fans to “get on down and start voting” before panning back to “The Rock” and giggling, “I love you Dwayne.”

Along with Hemsworth, Dwayne “The Rock” Johnson, and Reynolds in the category for Action Movie Star are also Chris Pratt, Elizabeth Olsen, Joey King, Tom Cruise, Viola Davis, and Zöe Kravitz. You can cast your vote for your favorite for this category and many others here.