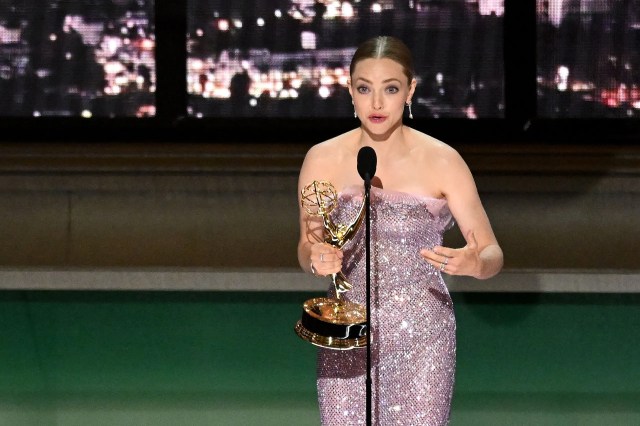 Amanda Seyfried has just won the Emmy Award for best actress in a limited series for her performance as Theranos founder Elizabeth Holmes in The Dropout. She started acting as a teenager in soap operas and made her film debut in 2004 as Karen Smith in the teen comedy Mean Girls. The film did well at the box office and developed a devoted following. After her initial success, she gained prominence by starring in the HBO drama series Big Love and the musical and romantic comedy Mamma Mia!, her first leading role. From there, she played notable roles in Jennifer’s Body and Les Misérables. In 2020, Seyfried received critical acclaim for her portrayal of actress Marion Davies in Mank, receiving Golden Globe and Academy Award nominations for Best Supporting Actress. Later this year, she will appear in The Crowded Room, an Apple TV+ anthology series starring Tom Holland among others.

We’ve taken this opportunity to rank Amanda Seyfried’s top 10 performances. These include her appearances in both television and film.

David Lynch set his return to the Twin Peaks universe 25 years after Laura Palmer’s dead body was found. Seyfried plays Becky Burnett, the daughter of Bobby and Shelly Briggs and another troubled young woman in a toxic relationship. Although Seyfried has only a few scenes, she gives one of the most memorable performances of the series. She is also the centerpiece for one of Lynch’s most heartbreaking shots of his career. The camera lingers on Seyfried’s face as she gets high in a convertible to escape her troubles to the tune of The Paris Sisters’ “I Love How You Love Me.”

Big Love is an HBO polygamy drama series that centers around a fundamentalist Mormon family. Seyfried plays Sarah Henrickson, the daughter of Bill Henrickson (Bill Paxton) and one of his three wives, Barbara Henrickson (Jeanne Tripplehorn). Sarah rebels against her parents and joins an ex-Mormon support group. There, she meets Scott and they eventually marry despite having a rough relationship. The series was Seyfried’s first major career success after Mean Girls, but she left after season 4 to focus on movies.

In Les Misérables, Seyfried transitions from ABBA’s greatest hits to tragic ballads. She plays Cosette, Valjean’s adopted daughter who falls in love with the revolutionary leader, Marius (Eddie Redmayne). Seyfried’s role was nominated as part of an Outstanding Performance by a Cast in a Motion Picture at the SAG Awards. Along with the rest of the cast, she sang live on set throughout the entire film. Although she doesn’t play one of the main characters, Seyfried is one of the key signifiers of hope in the midst of a melancholic story.

Seyfried’s breakthrough role as Karen Smith in Mean Girls launched her onto the international stage. She originally auditioned for Regina George (Rachel McAdams), the leader of the “Plastics”, but the producers thought she would be a better fit for the sweet but ditzy member. This was a wise decision, as Seyfried nailed the comedic timing required for Karen. Mean Girls has become ingrained in ’00s pop culture with it considered to be one of the most quotable films of all time. It remains frighteningly accurate to this day and is one of the most iconic teen movies.

After her success with Mean Girls, Seyfried won the leading role in Mamma Mia! as Sophie Sheridan. The film is based on a book and 1999 musical and features songs from the Swedish pop band ABBA. The film follows Sophie as she invites three men to her wedding, one of which is her biological father. The film was a significant box office success and led to a sequel 10 years later. The role showcases Seyfried’s range as a lead in a musical in addition to her ability to act in a fun and campy film.

Seyfried dipped her feet into the horror genre with Jennifer’s Body. She plays Needy, whose best friend Jennifer (Megan Fox) becomes demonically possessed after a band sacrifices her to Satan for career success. As a succubus, Jennifer eats men’s flesh to maintain her physical appearance and abilities. It’s up to Needy to stop her. Seyfried’s chemistry with Fox is great and the two are able to believably portray a friendship between two very different people. Seyfried conveys the character’s shift from innocent and nerdy to the horror film’s final girl. Jennifer’s Body initially received a mixed response but later got more favorable reviews as it became a feminist cult film.

First Reformed centers around a Protestant pastor named Toller (Ethan Hawke) who is grieving over the death of his son. Meanwhile, a pregnant woman named Mary (Amanda Seyfried) asks Toller to counsel her husband, Michael (Philip Ettinger), who does not want to bring a child into a world that has been destroyed by climate change. At the same time, Toller is celebrating the 250th anniversary of the establishment, which is part of a corporate megachurch financially backed by a heavily-polluting factory owner. Seyfried plays well off of Hawke, giving a reserved yet vulnerable performance. Seyfried again demonstrates her range – this time acting in a dark and reflective film made by the same writer as films like Taxi Driver and Raging Bull.

Mank is a David Fincher film about Old Hollywood, screenwriter Herman J. Mankiewicz (Gary Oldman), and the drama-filled development of the screenplay for Citizen Kane. Seyfried plays Marion Davies, a sharp and talented actress who is also the mistress of newspaper magnate William Randolph Hearst (Charles Dance). Marion was close to Herman and had a large influence on the screenplay. The film went on to earn ten nominations at the Academy Awards, including Best Supporting Actress for Seyfried. Mank showcases Seyfried’s ability to seamlessly work in period pieces. Despite Fincher most likely shooting numerous takes, her performance feels natural and communicates Marion’s hidden layers of vulnerability behind her outer shell of cheerfulness.

The Dropout is a Hulu drama miniseries based on the podcast of the same name hosted by Rebecca Jarvis. The series details the rise and fall of Elizabeth Holmes, the founder of Theranos, and her early life experiences that may have motivated her lies to investors. Seyfried plays her as a mixture of ambition, selfishness, and the manic need to prove doubters wrong. It was no mean feat as her performance manages to both humanize Holmes as well as explore her allure to the many people who come to believe in her. This role may be the culmination of her career – combining the defiant teenager in Twin Peaks: The Return, ambitious young woman in Mank, and embodiment of fury in Jennifer’s Body.