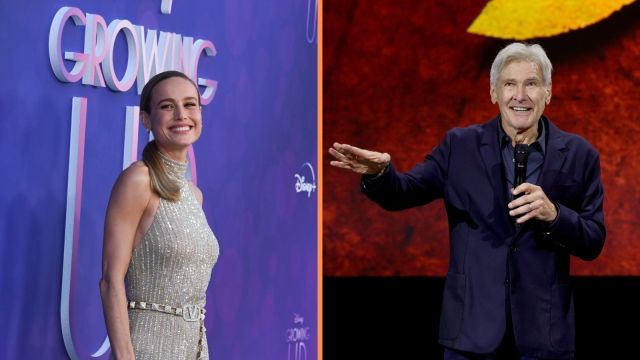 Brie Larson has shared one of the most adorable photos from D23 as she and her The Marvels co-stars met Harrison Ford.

D23 saw a myriad of first looks at major upcoming projects from Disney and its many subsidiaries, with highlights being Marvel showing off trailers for Ant-Man and the Wasp: Quantumania, Werewolf by Night, and The Marvels. Sister company Lucasfilm also saw a big one shown off: Indiana Jones 5.

Ford, back as Indiana Jones, looked ecstatic to be talking about the project in what was a far-cry from his clear disinterest in promoting Star Wars. With all these A-list celebrities together, it’s no surprise Larson and her co-stars found a way to chat to the cinema icon that is Ford.

Sharing the photo onto her social platforms, Larson, Iman Vellani, Nia DaCosta, and Teyonah Paris are visibly stunned at meeting the Han Solo actor. Larson’s caption even read as such: “and they were too stunned to speak.”

Vellani’s reaction is by far the most astonished, with her truly acting how a real-life Kamala Khan would act in the situation. The cast did manage to get some nice photos with Ford, and it’s one of the nicest crossover moments from last weekend’s D23 action.

Larson made headlines at the expo for her comments regarding whether anybody would want her to return as Captain Marvel past this upcoming sequel, before making an Instagram post inviting the trolls to take her on. Having been a target of abuse since she entered the universe, it’s not a surprise she’s gotten more robust.

The positive news is she clearly loves the role and her castmates, and that she’s expected to be one of the major players going forward in the Marvel Cinematic Universe. Larson and her co-stars will soar into cinemas July 2023 when The Marvels debuts.