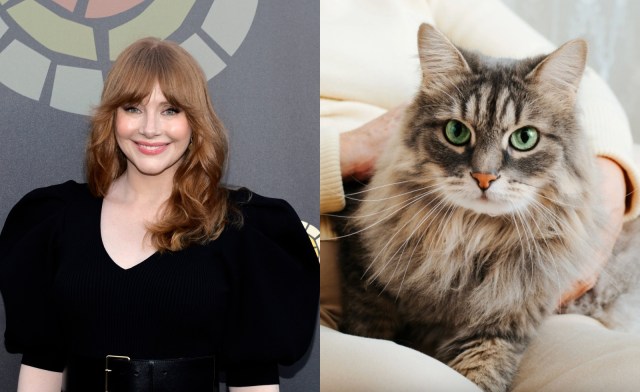 Anyone who’s ever owned — or even interacted with — our feisty feline friends will be well aware that cats are prone to asserting dominance, especially when threatened on their home turf or intimidated by larger animals. Another instance where cats might assert dominance is in a household that contains multiple cats; the display of assertion separates the leader from the followers. Cats might hiss, growl or even bully other cats away from their food bowl or litter box to express physical or territorial aggression. Not all cats are hostile when asserting dominance, however, as some felines convey this behavior in a much more affectionate and innocent manner. Take Bryce Dallas Howard‘s cats, for example.

The 41-year-old Jurassic World actress frequently tames her own dinosaur equivalents at home with her Abyssinian called Sophia. Howard uploaded two images on her Twitter account that show herself and her 68-year-old father, the American director, producer, screenwriter and actor, Ron Howard. Atop their shoulders is (we assume) Sophia, the Abyssinian that the Howards adopted sometime around 2017, if the timeline matches her Twitter posts. In 2006, Howard married fellow actor Seth Gabel and there were talks of the Howard-Gabel household adopting a puppy for their son, Theo, in 2020, but there hasn’t been any new revelations since.

Apparently, it isn’t just the average citizen that bends to the will of their feline friend, since Bryce and Ron seem quite content with Sophia perched on their shoulders. As we all know, cats also seek high vantage points to assert dominance, and there’s no easier way to prove you’re the boss than jumping on a human’s shoulders. However, the Howards don’t seem to mind, especially as Sophia is more than happy to give plentiful licks and nuzzles.