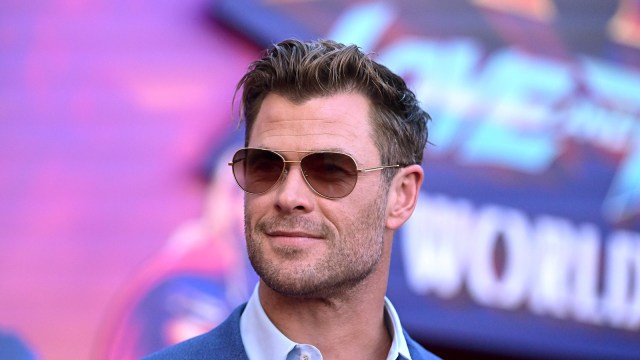 To be Thor, Chris Hemsworth has to put a lot of work into his body, mind, and spirit. Look what happened to him in Avengers: Endgame when he failed to beat Thanos and went on a binge that made him look like Joe Dirt’s bigger brother, and bigger as in around the waist. He had to snap back into shape to help save the world and it appears that he had to do it again for Thor: Love and Thunder.

Hemsworth took his fans behind the scenes to see how he makes the magic happen. In this workout video, his determination is raw and his technique exquisite. It wasn’t going to be easy work to get back into shape before the film’s release in July, but his passion for saving the world drove him to pure excellence.

While working out, it’s particularly important to pick the right motivational music. Loverboy’s “Working for the Weekend” is the perfect track that is reminiscent of the ’80s inspiration montages like “You’re the Best” in Karate Kid, “Eye of the Tiger” in Rocky III, and “Win in the End” in Teen Wolf. So, Hemsworth came out fighting strong.

His technique was impeccable. His roundhouse kick almost makes it to the top of his head where most of his victims would feel it if he ever needed to defeat them that way. His punches are nearly lightning fast. The only difference between his punches and lightning-fast punches are his can be seen.

Those kicks are deadly. They are from a god, and that should always be remembered. So what looks like slow-motion kicks are actually very powerful to humans and other superheroes.

For a man with an extra tire in the middle area, the balance and time are exemplary. He doesn’t fall once while his legs are circling his body at three, maybe even four miles per hour. It’s phenomenal.

Chris Hemsworth is an inspiration to millions of fans. This video is a testimony to how he inspires others to be the best version of themselves they can be. He won’t settle for less.

Some MC fans aren’t happy with the humor. It’s always been there and the humor makes the entire MCU shine above all other entertainment. Would a dark, gritty Thor be as good as the one Chris Hemsworth is playing? That would shift the entire world into an alternate universe and ironically, only Thor himself would be able to save the day.