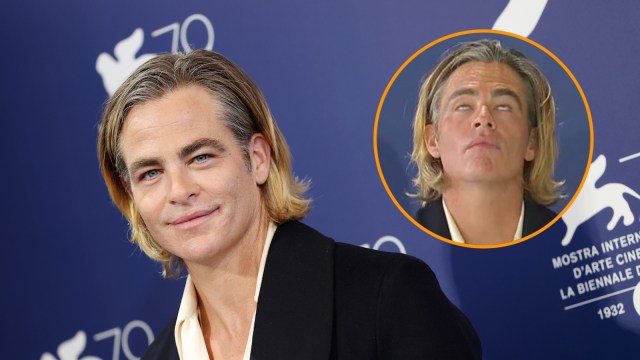 A backdrop of chaos around the production of Don’t Worry Darling seems to bother Chris Pine little as he attempts to jazz up the Venice Film Festival.

Florence Pugh and Olivia Wilde’s reported feud that has made up the majority of the film’s press seems to have resulted in other members of the cast doing whatever they can to change the narrative. This included having Harry Styles kiss Nick Kroll, Olivia Wilde talk about how good Pugh’s performance was, and having Pine do whatever the heck he felt like.

Then came those making beautiful poems discussing the exact situation he was in. Stuck between two feuding actors, he earnt his money as an actor. Other highlights include his look which gave real Hunger Games vibes as he channeled Woody Harrelson.

Far more wholesome though was his lovely moment on the red carpet with co-star Pugh. While she was taking the attention of every camera in the vicinity of Venice, Pine took out his disposable camera and snapped a photo of her himself. It may just be the most wholesome thing to come out of this nightmare.

Don’t Worry Darling is set for a full cinematic release from Sept. 23, but early reviews suggest you may want to wait until it hits streaming. Or until more gossip is unearthed about Wilde and Pugh’s alleged falling out.