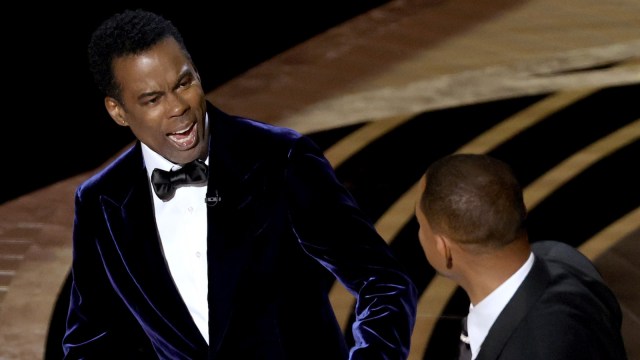 It’s been a few months since the Oscars slap heard around the world between aggressor Will Smith and comedian Chris Rock. A lot has happened since, but we’re now learning that Rock turned down an offer to host the next ceremony.

The Arizona Republic turned up at one of Rock’s standup shows in Phoenix, during which the comedian said he was asked to host the next ceremony. He reportedly said no, adding that returning to host the ceremony would be just like returning to a crime scene.

He then referenced the O.J. Simpson trial, and likened asking him to host to asking Nicole Brown Simpson to “go back to the restaurant” where she left her glasses before she was killed. Rock appeared at the Arizona Financial Theatre on Sunday night, and also shared he was offered a Super Bowl commercial but turned that down as well.

Rock reportedly touched on the now-infamous slap early in his set, and mentioned that people can get famous for being victims when someone in the crowd shouted “talk about it,” according to the news organization. Rock answered that getting hit by Smith was painful, especially because Smith played legendary boxer Muhammad Ali in a movie.

“He’s bigger than me,” Rock said. “The state of Nevada would not sanction a fight between me and Will Smith.”

The Academy of Motion Pictures Arts and Sciences has yet to comment on whether it did indeed offer Rock the spot. Rock has stayed mostly quiet about the slap, but Smith was banned from the academy for 10 years. He was also criticized for not immediately apologizing to Rock for the incident.

In July, he posted a video apologizing. “Chris, I apologize to you. My behavior was unacceptable and I’m here whenever you’re ready to talk,” Smith said. Rock has occasionally referenced the slap in his stand up but has yet to do a full routine on it.

When he was asked about the incident in April, he told the Desert Sun that he needed a good reason to talk about it.

“I’m OK, I have a whole show, and I’m not talking about that until I get paid. Life is good. I got my hearing back.”