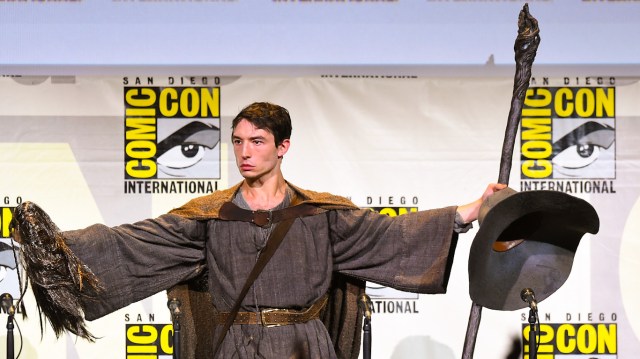 Marquee DCEU star Ezra Miller keeps making the news, but not in the good way. Miller, whose troubling exploits have been documented again and again, once again got into an altercation – this time over smoking a cigarette indoors.

This latest incident was told to Variety by a woman named Nadia who asked that only her first name be used. The woman said she had a pretty good relationship with Miller, who is nonbinary and uses they them pronouns, for two years up to that point and that they came to her apartment in February 2022 after she asked them to.

Prior to that, the two had a consensual encounter in 2020. Miller tried to smoke a cigarette in the apartment but Nadia asked him not to. That’s when things took a turn, she said.

“That just set them off. I asked them to leave about 20 times, maybe more. They started insulting me. I’m a ‘transphobic piece of shit.’ I’m a ‘Nazi.’ It became so, so stressful for me. They were going around my house, looking at everything, touching everything, spreading tobacco leaves on the floor. It felt disgusting and very intrusive.”

The idea that he had to go outside was apparently too much, because Miller said they were a “maker of planets.”

“And this I’m quoting word for word. They started with ‘I’m a maker of planets. Tobacco is sacred.’” Miller continued on a “tirade,” she said, that they could do “whatever they want whenever they want, basically.” When Nadia stood up to insist that guests should honor their host’s house rules, “they looked at me with this really mean, stern face, and told me, ‘Sit down,’ like they were ordering a dog.”

Nadia told Miller she didn’t appreciate being talked to like that. Miller said, “Yes, I’m talking to you like a dog.”

This caused Miller to accuse Nadia of being transphobic and a nazi.

“I asked them if they remember I told them I’m a descendant of Holocaust survivors, so why would they say that to me? They answered, screaming at me, ‘Yes, but how many people of my family died?’ Because many people in their family died. I was like, Oh, OK, this is a game of who’s got the most trauma.”

Nadia said she pulled away and stopped talking to him. “The only thing I said to them was ‘Leave my house. Go away. Go away. Leave. Can you leave now?’” she said. “Like a broken record.”

Finally, Miller went into Nadia’s bedroom and when she asked him to leave, “they started to shout that they were a rape survivor and I was triggering them. They started to say I had assaulted them. I had beat them up. I had hurt them.”

Nadia said she isn’t worried about Miller’s wrath because he has so much other stuff going on.

“They’re probably not thinking about me anymore because I’m just one of many people they abused,” she said.