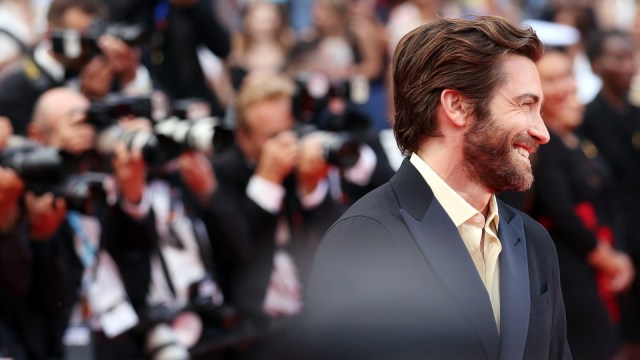 Deranged and drenched in a sadistic sense of a humor — we’ve seen this from both The Joker and Jake Gyllenhaal in their time on screen.

Now we’re here for those things combining forces in a fantastically frenzied way.

From the early days when Gyllenhaal gave that entranced and possessed style look to the camera for Donnie Darko, to his run as someone driven to extremes in chasing something he can’t let go of in Zodiac, Nightcrawler, Ambulance, and Nocturnal Animals, among many others, it’s no big stretch to imagine the mega-talented 41-year-old actor easily morphing himself into one of the most notorious comic villains in existence.

We’ve gotten incredible and diverse takes on The Joker that ranged from immersion in the character — Heath Ledger, Jack Nicholson — to the bizarro and saturated (Jared Leto, Joaquin Phoenix), and thinking of the personas and performances Gyllenhaal has given us throughout his career, his take as The Joker would be up there with the most memorable.

One fan felt the exact same way and gave us this glimpse of fan art that images Gyllenhaal as the Clown Prince of Crime. Thinking of the expressions and facial mannerisms of terror and hysteria all at once that Gyllenhaal could give us if he were ever offered — or wanted — one of the juiciest on-screen roles there is in our current superhero and supervillain dominated landscape, the image alone evokes a desire to see him bring this image to life.

Posted by user skull101ify on Instagram, the image gives Gyllenhaal a grin of grimness and glee combined with eyes that look like they’d delight in seeing people in terror.

We even found a nice little mashup of Ledger’s great delivery of, “Why so serious? Let’s put a smile on that face” mixed with Gyllenhaal in Demolition, and even though his persona in that movie doesn’t really match The Joker, the moment of his frown going upside down is a neat one. It’s a bit extra special for those who remember Ledger and Gyllenhaal’s bond stemming from their dual lead roles in Brokeback Mountain.

Going a step deeper and putting us even closer to this alternative reality, ReactYT posted a video back in September 2020 that shows Gyllenhaal’s face superimposed over Phoenix in his turn in 2019’s Joker film, which is getting a heavily anticipated sequel as we all can’t wait to see what Lady Gaga brings to the crazy table.

We’ll leave you with this little YouTube video, very fittingly called “Jake Gyllenhaal being chaotic for 5 minutes & 31 seconds,” which you can allow for a stand-in as Gyllenhaal auditioning for a role as The Joker, because we sure did.

It’s pretty amazing, as is Gyllenhaal. Now we wait for fiction to become reality with him as The Joker.