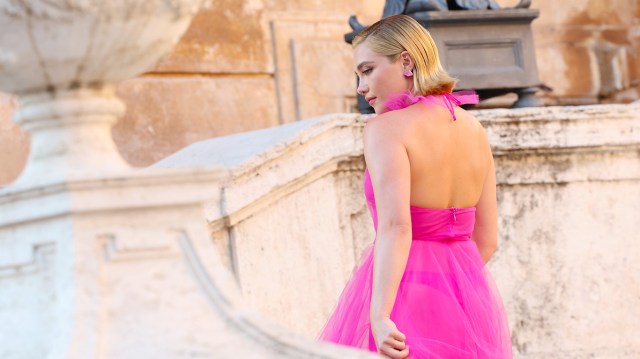 Florence Pugh has taken to Instagram to address critics who are attempting to body shame her for a clothing choice she made recently. The lauded actress stunned onlookers in a stunning sheer, hot pink Valentino gown at the Valentino Haute Couture show in Italy on Friday. Though many of the commenters were in awe of the actress and praising her boldness, it is still the internet, the trolls had to come crawling out to make derogatory comments about a woman’s body because, let’s face it, they have nothing better to do.

The Black Widow actress said she knew this was coming when she chose this dress and that she didn’t care, writing “I was excited to wear it, not a wink of me was nervous. I wasn’t before, during or even now after”. On Instagram, she posted more images of her in the dress, looking absolutely stunning in each one, and addressed the backlash she received simply because she dared to bare her breasts. In a world where more than 50% of the population has them, some people still can’t get over the sheer sight of a bosom, or more specifically, a woman’s nipple.

What’s even more audacious is that according to Pugh, some expressed “disappointment” at the sight of her breasts, which begs the question, who asked you and why on earth do you think your opinion matters to Pugh, or anyone else for that matter? For Pugh, the criticisms roll right off of her, as she asks “It makes me wonder what happened to you to be so content on being so loudly upset by the size of my boobs and body..?”

In a world where women are being constantly judged, compared, and found wanting, Pugh was having none of it.

“I’m very grateful that I grew up in a household with very strong, powerful, curvy women. We were raised to find power in the creases of our body. To be loud about being comfortable. It has always been my mission in this industry to say ‘fuck it and fuck that’ whenever anyone expects my body to morph into an opinion of what’s hot or sexually attractive.”

Her final message was to those that thought they had any right to make negative comments about her body, with Pugh stating, “Grow up. Respect people. Respect bodies. Respect all women. Respect humans. Life will get a whole lot easier, I promise.”

She truly is regal, and no random stranger sitting on their computer, or desperately trying to make their sexist thoughts heard via their mobile phone somewhere, is going to make her feel any less like the queen she is.