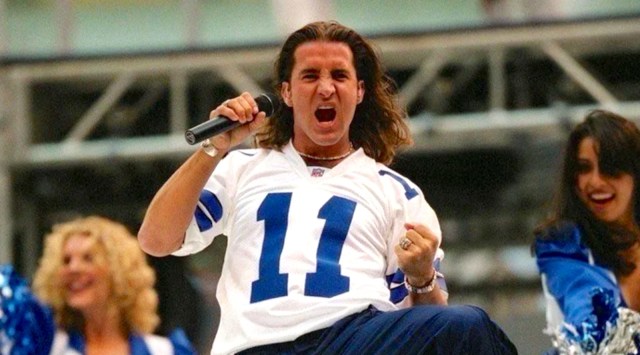 Bebe Rexha’s half-time show in the NFL caused headspins and boos, and the Jonas Brothers‘ show had people yearning for more, but there’s only one goated half-time show worth talking about — 2001’s performance from Creed.

The Thanksgiving annual treat of NFL live performances is always prone to some incredible scenes and bizarre moments. Cast your mind back 21 years to the fateful 2001 performance from the all-but-forgotten Creed. The performance lives in infamy, almost like a cultural reset. Featuring shirtless men flying in on wings and lead singer Scott Stapp wearing a jersey with his name on it, it’s almost too beautiful for words.

Performing “Higher” and “My Sacrifice”, this is what rock’n’roll’s all about, baby! Stapp’s luxurious mane and gold chains are perfectly complimented by Mark Tremonti’s Matrix-inspired leather coat and horrendous chinstrap. It’s like a time machine to the early 2000s.

Creed has disbanded multiple times since 2001, and frankly, a Thanksgiving return would’ve been an absolute highlight of the festive season, especially after Rexha’s vertigo-inducing performance this year in Detroit. Some are wondering if we’re simply running out of artists who could perform a show as big as this nowadays.

If you’re wondering what Stapp is up to these days, he’s had a litany of legal issues and a few personal life conundrums. In good news, he’s set to play Frank Sinatra in a 2023 biopic about Ronald Reagan titled simply as Reagan. The world obviously needs a biopic on Reagan to distract us from the disturbing amount of Reagan-esque politicians ruling the country today, after all.