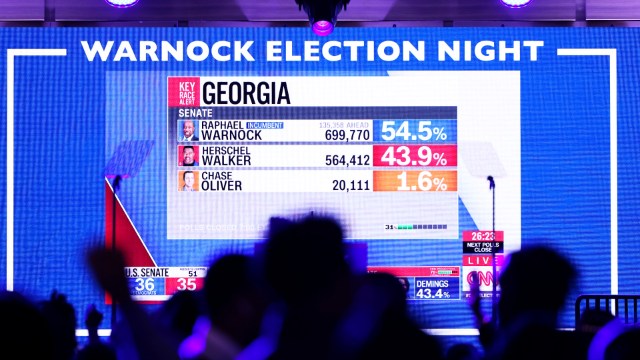 The good news, depending who you ask, of course, is that Trump-endorsed celebrity fringe candidate Herschel Walker has not won Tuesday’s senate race against incumbent democrat Raphael Warnock. But the bad news is that with 98 percent of the vote in at the time of this writing, Warnock leads Walker 49.4 percent to 48.5 percent.

While in most cases, it would seem that the outcome would be leading to an easy win for Warnock, Georgia law states that candidates must receive a 50 percent majority win, and it seems unlikely that the votes are there to bump him over 50. That means that the two candidates are most likely heading into a runoff election in December, and it’s anybody’s best guess what happens from here.

Now, runoff elections in Georgia have historically favored Republican candidates, as the system was first created in the 1960s as a way of preserving white political power in a predominately Black state. But it’s worth noting Warnock himself took office following a 2021 runoff election win against incumbent Kelly Loeffler, who had been appointed after the retirement of Sen. Johnny Isakson in 2019.

So perhaps it’s a bit too soon to get cocky. But that is precisely what Star Trek actor George Takei did by trolling Walker over the two sons and a daughter he did not publicly acknowledge before launching his 2022 Senate campaign. (Not to mention the whole abortion scandal, as it came out last month that the publicly anti-choice Walker had allegedly paid two women to have abortions after getting them pregnant — allegations he still denies).

“Has anyone explained to Herschel Walker that ‘runoff’ doesn’t mean what he did to his kids?” Takei quipped.

At any rate, Warnock seems to remain hopeful that the tides will turn in his favor, as he told supporters who stuck around at his election night party in suburban Atlanta just before 2 am on Wednesday, according to PBS.

“We’re not sure if this journey is over tonight or if there’s still a little work yet to do,” told the dwindling crowd. “I understand that at this late hour you may be a little tired, but whether it’s later tonight or tomorrow or four weeks from now, we will hear from the people of Georgia.”