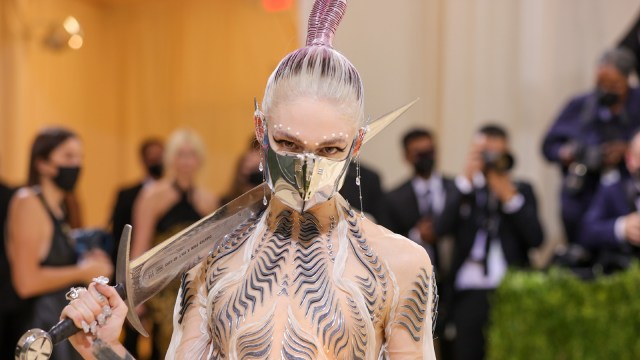 We know this will probably come as a huge surprise, but Grimes — the singer-songwriter and producer who has willingly given two children to billionaire Elon Musk and is pictured above wielding a sword at last year’s Met Gala — wants elf ears.

Elf ears! Despite the fact that she ostensibly has the type of resources that come with having children with one of the wealthiest men in the world, the 34-year-old decided to crowdsource her very Lord of the Rings-esque request on Twitter, of all places.

“Two years ago I made an appointment with a great plastic surgeon, thought I might want to change things up by my mid 30s, but then I forgot and never thought about what I should do. Any face mods y’all think would look good on me?” Grimes asked on Monday evening, adding that while elf ears wasn’t an option, that is was a separate quest.

But then, perhaps after doing a few minutes of thinking about the subject, she followed up shortly after that she was also considering vampire teeth caps — soliciting requests for both that and the elf ears. “Still debating this surgery [because] cartilage doesn’t heal so it requires permanent stitches,” she added.

Also does anyone know anyone great/ safe/ reliable ppl who could do vampire teeth caps on me in Austin or la?

Also, any reputable elf ear modifiers in either of these cities? (Still debating this surgery cuz cartilage doesn’t heal so it requires permanent stitches)

In a third tweet, Grimes asked if anyone else had experience with modifying their ears into jaunty little points.

“Also, has anyone done elf ear mods with a good outcome?” she asked. “I’m scared about ear cartilage having a hard time healing. Especially as a musician this surgery seems risky but I’ve wanted it my whole life. Curious about peoples experiences!”

Also, has anyone done elf ear mods with a good outcome? Im scared about ear cartilage having a hard time healing. Especially as a musician this surgery seems risky but I’ve wanted it my whole life. Curious about peoples experiences !

But don’t worry, because regardless of what Grimes gets done to her body, she is promising to keep her nose — apparently, there was a threat of that?

Ps sorry if weird 2 discuss this openly, just seems unhealthy how every1 in media hides body mods,then ppl feel self conscious. Im also less interested in conventional beauty (I will keep my nose) – but moreso is there anything else that wud look sick? It’s dr kao

Shockingly, the trend of elf ear modifications is nothing new. ABC News even reported on the procedure, which is done by cutting the cartilage on the top of the ear and sewing it together to create a point, way back in 2011. Does this mean Grimes is actually behind the times?

“It was just something I thought would be fascinating,” said one woman who had undergone the elf ear surgery. “I wouldn’t go as far as saying Trekie, but definitely Lord of the Rings — all the sci-fi kind of stuff. It just fits my personality.”

“There’s a lot of people out there who have an inner vision of themselves and they want to express that to the world around them,” explained Steve Haworth, a body modification artist from Tempe, Arizona. “I’m very happy to be an artist that can provide that kind of work.”

We wish Grimes nothing but the best of luck as she embarks on this elven journey.