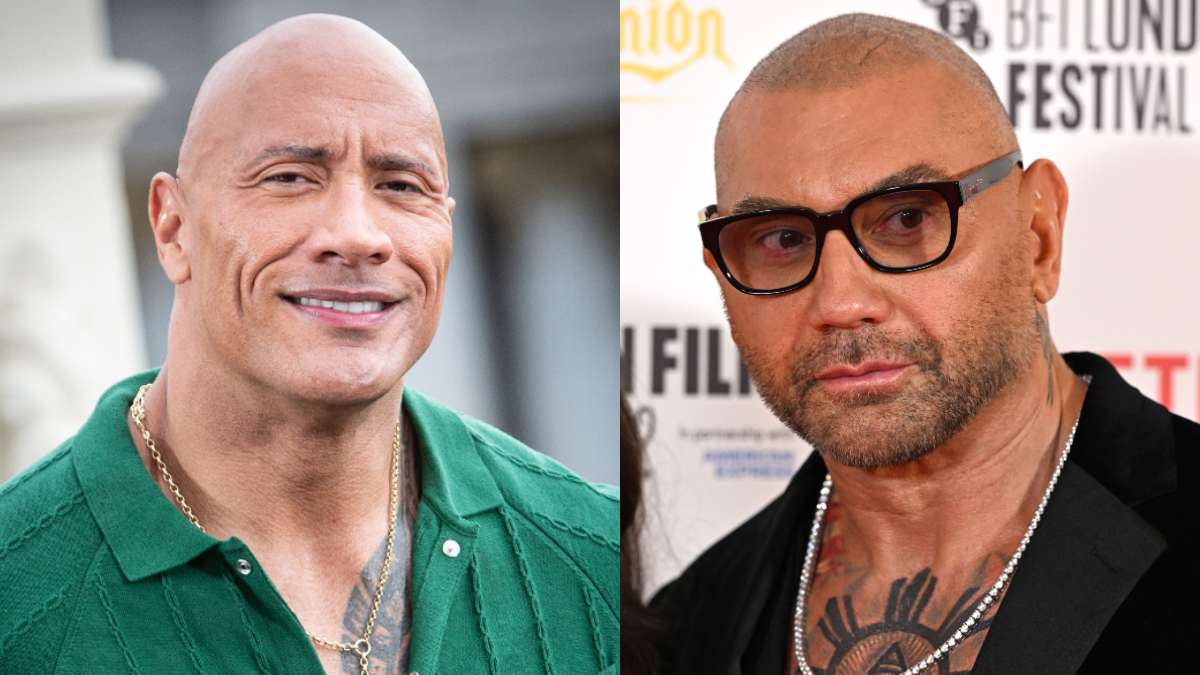 A new war has erupted in Hollywood, between Dwayne “the Rock” Johnson and Dave Bautista.

The two actors have a surprising amount in common, but that doesn’t mean they get along. Both got their start in wrestling, before pivoting to acting, and tend to lean on comedic or action roles, but that’s where their similarities end. Johnson’s career is inarguably more robust than Bautista’s—with more than 60 film and television roles under his belt—but many of his performances are lackluster, at best.

That doesn’t mean we don’t love him, of course, but his string of bland roles isn’t doing Johnson any favors. The actor’s tendency to stagnate as the same character, time after time, is reportedly a personal choice, and it’s starting to sour his fanbase. This, combined with a recent beef between the Black Adam star and the MCU’s Drax, is pushing many people to consider which Johnson roles may have been improved by some minor recasting. We might miss Johnson’s unique approach in some of these films, but it’s hard to argue that Bautista might have done a better job.

There are a few roles that Johnson remains irreplaceable in—like his role as Maui in Moana—but the vast majority of his film roles are pretty cut and paste. Johnson has a tendency to play lightly comedic, but largely action-oriented, roles that emphasize his overall masculinity. He loves to take the idea of beefcake to a new level—an idea Bautista perfected years ago—but the lack of diversity in his selections is starting to wear on viewers. With their beef still sizzling in the background, we’re taking a look at eight film roles defined by Johnson that we think Bautista could have done better.

Bautista actually starred in one of the followups to this atrocious Mummy spin-off, but we think the films could have done better if he was a staple from the very start. Johnson isn’t the primary reason this cheesy film is considered alongside a number of Razzie favorites, but he certainly didn’t help things. With a bit more flavor, and a touch of his comedic charm, Bautista might have helped the first Scorpion King rise above its 41 percent score on Rotten Tomatoes.

We are by no means criticizing his performance in Get Smart, but Johnson’s grasp of comedy simply isn’t as good as Bautista’s. Bautista has proven, over a number of roles, that his comedic presence is nearly as impressive as his biceps, and we think he would have performed splendidly alongside beloved comedian Steve Carell.

If you can’t tell by now, comedies are a staple of this list. Johnson’s no slouch when it comes to humorous roles, but his timing and delivery don’t pack nearly the punch Bautista can boast. The Other Guys, starring Mark Wahlberg and Will Ferrell, is a charming—if mid-level—take on the buddy cop genre, and we think Bautista’s presence would have given the film just the boost it needed.

This action thriller actually contains one of Johnson’s most “thoughtful” performances, according to Rotten Tomatoes, but that isn’t enough to make it a good watch. Bautista hasn’t led many serious films, but a role at the head of Snitch may have given him just the opportunity he needed to flex those sober chops.

Really, we mean the entire Fast & Furious franchise, but it all began with Fast Five. The fifth film in the utterly, hilariously masculine franchise introduced Johnson’s Luke Hobbs, and made him a staple of the franchise. Johnson has delivered some excellent performances over the years, but Bautista inarguably boasts just the energy this longstanding franchise needs.

Once again, we’re back to comedies. This goofy 2017 flick delivers the bared flesh and slow motion running of the original with thoroughly modern style, and its overall as good as anyone could ever expect it to be—at least with Johnson in one of the leading roles. If he were traded out for Bautista, however, we think this film could have risen above the relatively low expectations, and become something truly delightful.

Netflix’s ambitions were somewhat thrashed when Red Notice released in 2021. The platform billed the film as one of its biggest hits of the year, but audiences largely found themselves unimpressed. We think the film could have been saved by Bautista’s presence, particularly alongside Ryan Reynolds, but we’ll never know for sure.

Look, we can’t know for certain that Dave Bautista could have saved this movie, but it’s far from impossible. Hype for Black Adam was sky-high, before the film dropped, but hopes were quickly dashed upon its official release. Johnson didn’t do a bad job, necessarily, but the restrictions his involvement put on the film were certainly part of its failure. Thus, we believe that replacing Johnson with Bautista might have been just what the movie needed to succeed.