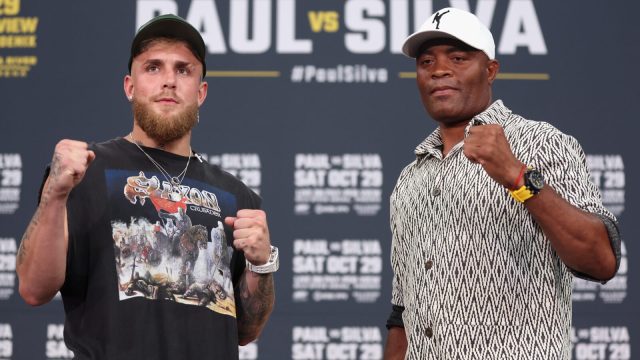 Jake Paul, baffling as it may be, is quickly becoming one of the newbies to watch in the world of boxing.

The YouTuber-turned-boxer has only been in a few fights so far, but he’s emerged from each of them victorious. He’s yet to be defeated in the ring, and — despite his broad unpopularity among a chunk of his audience — boxing fans can’t help but take notice. Many of his matches thus far have been against relative unknowns, but Paul’s next match is set to properly test the up-and-coming boxer. He’s slated to face off against MMA champ Anderson Silva at the end of October, and many fans feel the match will determine Paul’s position in the boxing world.

If you’re hoping to watch Paul and Silva face off, the fight will be available to enjoy both in person and on streaming. Here’s where, and how, you can tune in.

How to watch Jake Paul vs Anderson Silva

Paul and Silva will meet in the ring on Oct. 29 at the Desert Diamond Arena in Glendale, Arizona. The event will kick off at 9pm Eastern Time, but the pair likely won’t face off until around 11:30pm ET, according to Sporting News. Silva’s lengthy history in Mixed Martial Arts and boxing give him a clear leg up on Paul, but “the Problem Child” has surprised fans before.

If you’re looking to enjoy the fight in person, tickets average around $60 from TicketSmarter, though key seats are running for several thousand. The cheapest tickets on the site are currently running for $24, and the most expensive are a whopping $7,476.
If you plan to tune in from a distance instead, the match can be streamed on PPV in the U.S.

State-side fans, as well as those in Canada, can rent it from Showtime for $59.99. Viewers in other areas of the world, including the UK, can watch it on Oct. 29 via FITE.tv. Australian viewers have a slightly longer wait, but can still enjoy the match starting on Oct. 30 via Kayo Sports.