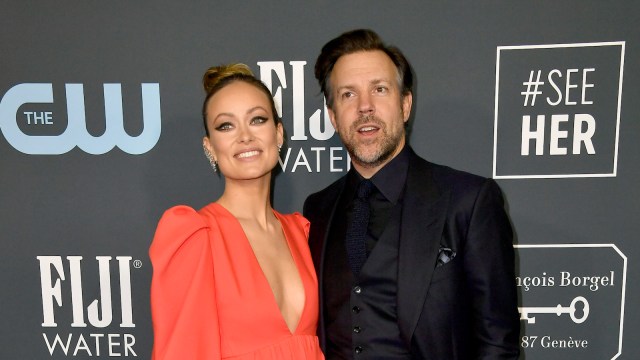 Up until now, we’ve only been able to speculate about the timeline between Olivia Wilde and Jason Sudeikis‘s separation, and how much singer Harry Styles had to do with it. According to a former nanny working for Sudeikis and Wilde, it got to the point that the Ted Lasso star threw himself under Wilde’s car to stop her from leaving…with a salad for Styles.

The Daily Mail recently published a bombshell interview with the couple’s nanny. As to how much we can trust the Mail is up for debate, but the story is wild. The official story is that Wilde left Sudeikis in early 2020 and the Styles thing started later. She even told Vanity Fair that “Our relationship was over long before I met Harry.” The nanny, who gave the interview under the condition of anonymity, claims that the couple actually broke up just weeks after Wilde started filming Don’t Worry Darling.

Sudeikis apparently found out about the affair from flirty texts appearing on Wilde’s Apple Watch, the nanny said, and then wouldn’t allow the children to listen to any Styles’ music as Wilde started spending more and more time away from the house.

The nanny said Wilde began living in a $1,650 a night hotel and told Sudeikis it was because of a Covid outbreak on set. Sudeikis was upset because he believed that Wilde pursued Styles and not the other way around. The separation was supposed to be temporary but Wilde simply never came back.

“He was just out of control crying. I didn’t know what to say. He was just crying and crying and saying he was going to get her back and he loved her,” the nanny said. “He was so broken hearted – I felt for him.”

The news organization also shared text messages from Sudeikis and Wilde. The nanny said she felt like she was caught in between the two of them.

A huge blowout happened after a cast dinner where Wilde reportedly kissed Styles. A few days later, Sudeikis blew up again because Wilde was making Styles a salad with her “special dressing.” He was yelling at her, the nanny said, and filming her, and when she tried to leave he tried to stop her by lying underneath her vehicle.

“She has a special salad dressing she makes for us and she’s taken it to have it with him now,” Sudeikis told the nanny. The breakup left Sudeikis broken and depressed and he took to drinking more and more. The nanny eventually quit after Sudeikis fired her for texting Wilde.

Sudeikis and Wilde provided the Mail with a statement about how the nanny was lying.

“As parents, it is incredibly upsetting to learn that a former nanny of our two young children would choose to make such false and scurrilous accusations about us publicly. Her now 18 month long campaign of harassing us, as well as loved ones, close friends and colleagues, has reached its unfortunate apex. We will continue to focus on raising and protecting our children with the sincere hope that she will now choose to leave our family alone.”

The whole article is worth checking out as there are a ton of uncomfortable details about how Sudeikis’ alleged alarming behavior after the breakup. This definitely puts all of the Don’t Worry Darling drama in a new light.