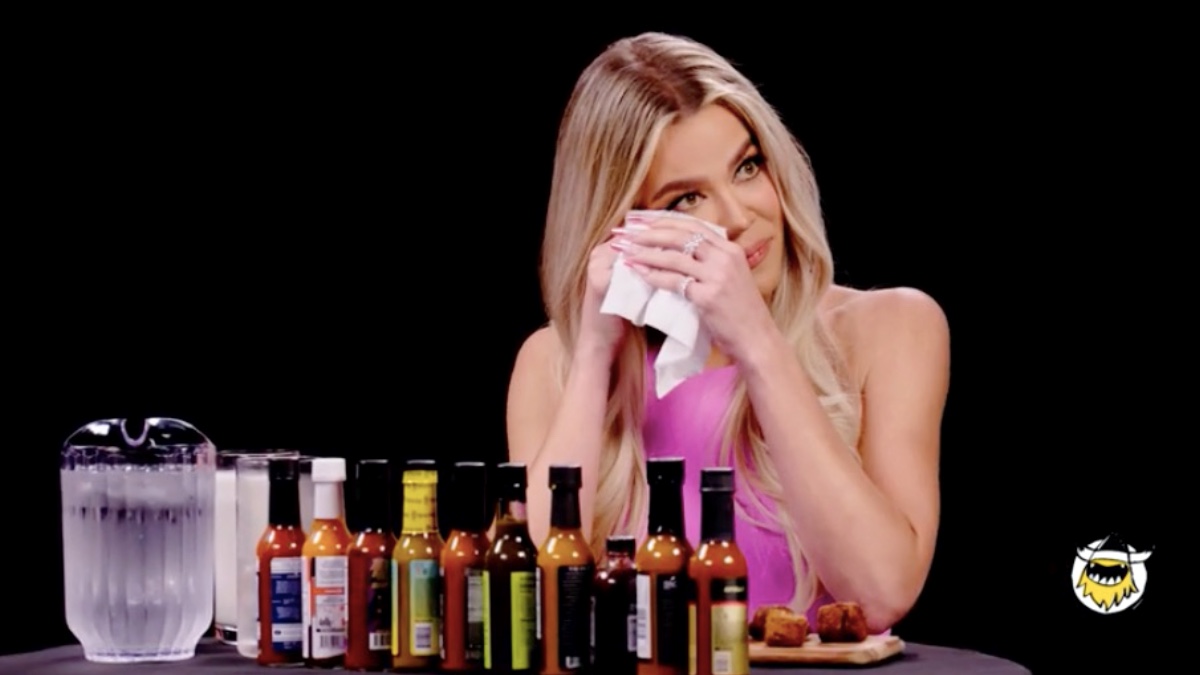 Khloé Kardashian makes an appearance on the latest episode of Hot Ones, the popular First We Feast web series that mixes up the standard interview format by having guests sample a lineup of 10 chicken wings with increasingly fiery hot sauces.

Regardless of how you feel about the Kardashians, you have to admire Khloé’s chutzpah — because you know damn well Kim or Kourtney wouldn’t be caught dead with running eye makeup. And run it did!

After flirting her way through the first few wings with host Sean Evans, who quickly ingratiated himself to Kardashian by complimenting her kitchen pantry organization, the Good American co-founder forgot how to answer questions or what she was there to promote.

It was around the sixth wing, covered in the 70,000 Scoville hot sauce Collards N Ghost, that Kardashian really started to feel the heat. “My eyes are crying,” she said, dabbing her face with a tissue.

“Oh shit,” Kardashain later said after sampling the eighth wing with Da Bomb Beyond Insanity Hot Sauce, and something unintelligible about milk. “Oh my god. Why do people do this?” Suffice to say, she had little patience for the next question about which cocktail she would serve with D Bomb. “Shit, I’m literally crying,” she said, ignoring the question. “No, I know, it’s fine. It’s the point of this … Fuck. Shit.”

But to her credit, Kardashian powered through and eventually made it to the end.

“I don’t know, I’m just trying to make it through the end of this,” Kardashian admitted through tears. “What do I have going on in my life? I don’t fucking know. Nothing.”

“Oh, watch Hulu,” she added, after some prodding. “And go to GoodAmerican.com.”

A hot sauce that causes a Kardashian to forget how to self promote? That’s not peppers, that’s sorcery.