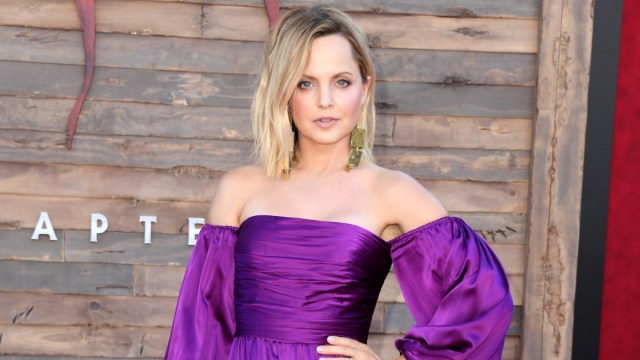 Last year, former “It Girl” Mena Suvari penned a sobering memoir called The Great Peace, which unpacked years of abuse and trauma she experienced at the hands of ex-boyfriends and other problematic men who preyed on her when she was a teen actress in the ’90s. With the release of the book in paperback in the UK, the 43-year-old spoke with The Guardian about the reception to the book and what she’s learned.

“It was bittersweet because it felt beautiful to feel seen and heard, but it was heartbreaking to hear that others had identified in similar ways,” Suvari said of the messages she has received from other abuse survivors after her book came out. “I didn’t want that for them, but overall I feel very proud. We’re living in the craziest time, the world’s on fire, but at the same time things are a lot more open. I always hoped that [the book] could help create some kind of change and initiate further conversation.”

She also spoke about one of the more disturbing revelations from the book, in which she began a “sordid and abusive” relationship with a lighting engineer who sexually abused and manipulated her into having threesomes with women she would pick up on set for him.

She says he would ask her to pick up other women to have threesomes with, including those she met on set. She bumped into one much later in a Whole Foods store, after she had become famous, and felt mortified. Another time, she ran into one of the women, and went over to her. ‘I said, ‘I want you to know that I never wanted to do any of those things.’ She was surprised. She said, ‘Oh, he told me you wanted to do that.’ It was a huge eye-opener for me, how I was being manipulated and I had no idea. The circumstances had been created for me, and I was just swallowed up by it.”

Though the reception to her book was mostly positive, Suvari says that she did face some criticism for being perceived as judgmental about what is or isn’t healthy in the bedroom — which was clearly so not the point.

“‘I’ve never wanted to speak negatively about things that can be very healthy for other people. I was not given the choice or the permission to do it, and that’s what was so destructive for me. It’s a very messed up thing when you experience sexual abuse, because part of it is …’ She pauses to think of the right word. ‘Like, satisfying. But then the other part is an absolute nightmare, so you’re confused, you don’t know what’s right. All of that still weighs on me because I never got the opportunity to discover myself in that way.’

She can’t imagine, she says, what it would have been like to have ‘dated throughout high school and then decided to consensually lose your virginity to one another. That sounds so beautiful to me. All of that was lost for me.’”

Thankfully, Suvari is in a much better place these days. In October of 2018, she wed set decorator Michael Hope, and the couple welcomed their first child together, a boy named Christopher, in 2021.