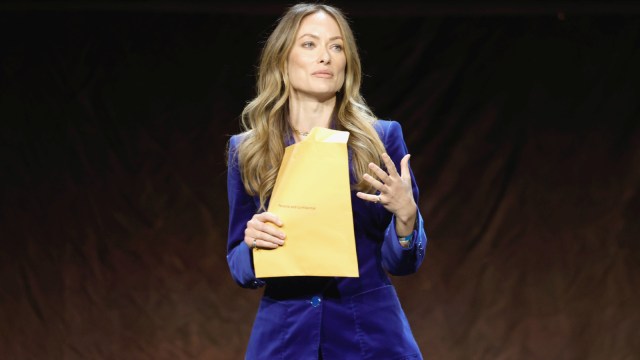 Olivia Wilde has finally opened up about the shocking incident that took place at CinemaCon earlier this year, in which she was famously served child custody papers while onstage during the event at Caesars Palace in Las Vegas. And shockingly, Wilde’s ex Jason Sudekis does not exactly come off looking great!

At the time of the incident, Wilde was introducing the trailer for her upcoming film and second directorial project, Don’t Worry Darling, starring Florence Pugh and Harry Styles, whom she’s currently dating, when she was approached by an unknown individual who handed her a blank manilla envelope. Although she handled it well at the time, it was later reported that the envelope contained legal documents from Sudekis.

Sudekis later claimed that he had no idea that Wilde would be served during CinemaCon, claiming hat he would “never condone her being served in such an inappropriate manner,” but it sounds like Wilde ain’t buying it.

“It was my workplace,” Wilde told Variety in a new cover story this week, without specifically naming her ex. “In any other workplace, it would be seen as an attack. It was really upsetting.”

“It shouldn’t have been able to happen. There was a huge breach in security, which is really scary. The hurdles that you had to jump through to get into that room with several badges, plus special COVID tests that had to be taken days in advance, which gave you wristbands that were necessary to gain access to the event — this was something that required forethought.

I hated that this nastiness distracted from the work of so many different people and the studio that I was up there representing. To try to sabotage that was really vicious. But I had a job to do; I’m not easily distracted. But, you know, sadly, it was not something that was entirely surprising to me. I mean, there’s a reason I left that relationship.”

As an extra unfortunate postscript, the ambush ended up being all for nothing. Sudekis’s custody petition had been to change the home state of their two children, Otis, 8, and Daisy, 5 from California to New York — but it was eventually denied by a judge. In other words, it sounds like Wilde isn’t only winning in the court of public opinion.