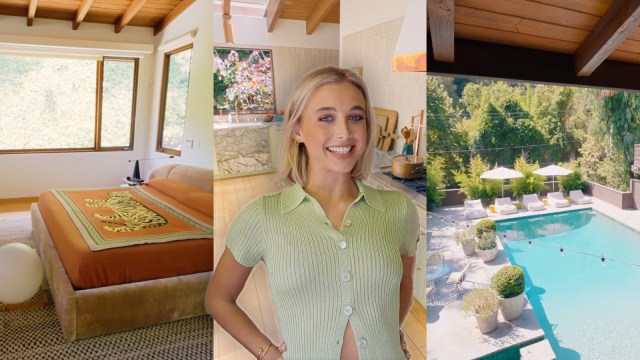 YouTube creator Emma Chamberlain sold her ‘starter’ LA home last year to make a way for a new Beverly Hills abode and, now, fans are getting their first real glimpse of her new residence. As you’d expect it’s inspiring plenty of jealousy.

Sold to the star for $4.3 million, this new 4,465 square feet home in Beverly Hills is incredibly filled with stunning natural wood and more than enough space for any homeowner.

Architectural Digest shared a detailed look inside Chamberlain’s home. Around the building, there is no shortage of natural light giving visitors a glimpse at the nature that surrounds the home.

Outside you’ll get even further immersed in nature as images shared in the piece showcase a stunning green landscape filled with stone, flowers, and more making this home feel like a getaway at home.

Fans of Chamberlain’s have taken to social media in awe of the new purchase and as you’d expect many are hoping to one day get their hands on something similar.

While $4.3 million might sound like a lot of money, the 21-year-old’s last home in West Hollywood which she purchased last year sold for $4.1 million. This building which boasts a much more modern look was sold not because of the home itself, but instead its location.

In a video, Chamberlain shared that her decision to sell came as she wanted to move somewhere more private away from the noise, crowds, and crime. Given privacy seems to have been her goal her new home in Beverly Hills would seem to be the perfect purchase.