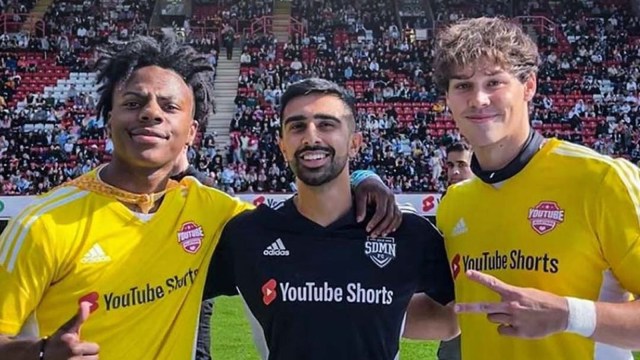 The second consecutive year of the Sidemen Charity match scored big, selling out Charlton Athletic stadium in The Valley in London. The game was played on Saturday, September 24, 2022, and it made history as the biggest YouTube football match ever played. To make things even better, it was all for good causes.

As reported by Dot Esports, the event gained more than 72,000 in-person fans and approximately 2.6 million live viewers on YouTube, all tuning in to watch some of the most famous content creators battle it out. Some of the names involved in the match included U.K. creators ChrisMD, Chunkz, Deji, KSI, Karl Jacobs, and Danny Aarons. Representing the American side were creators like MrBeast, IShowSpeed, and Noah Beck.

There were multiple standout moments throughout the match including an impressive shot by Filly that put the YouTube All-Stars in the lead as well as IShowSpeed showing that was a big crowd pleaser.

Youtube star Mark Goldbridge and London football star Billy Wingrove were the managers of the respective teams, and both apparently held their own. Fifteen total goals were scored by the end of the match, and Miniminter’s goal secured Sidemen FC the win with the final score of 8-7.

Although Beck’s team lost, he was a good sport about the whole thing. He was disappointed in his showing, but he thanked Sidemen for the opportunity.

Sidemen charity promoted four fundraising charities based in the U.K. The amount was split across Campaign Against Living Miserably, Teenage Cancer Trust, Ray of Sunshine, and M7 Education. Sidemen reportedly raised over £1,000,000 by the end of the event.