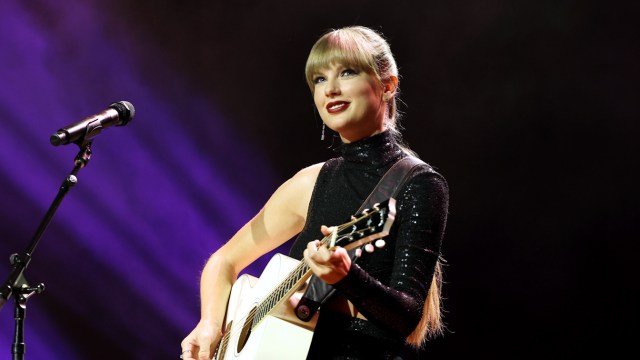 Taylor Swift stans are practically shivering with excitement now that we’re less than a day away from the release of Midnights, the singer’s hotly-anticipated tenth studio album. But before midnight arrives, T-Swizzle wants you to tune in for Thursday Night Football on Prime Video to catch a positively juicy teaser trailer that probably involves “Anti-Hero,” the first song in the Midnights line-up to get a music video.

Taking to Twitter and Instagram to announce the imminent release of this teaser trailer for some of the “secret projects” she’s been working on for a while, here’s the message the unrivaled queen of musical bridges dropped for fans.

“Hey guys, it’s Taylor,” announces Blondie, as if anyone wouldn’t recognize those ocean-blue eyes that make her look like an American singer. “If you tune in to the Thursday Night Football game on Amazon Prime, I’m going to be showing a first look at the secret projects I’ve been working on very hard for a very long time, getting ready for the Midnights album. And you would see it before the Midnights album came out. So, meet you there?”

Suffice it to say, the overseers for Thursday Football Night are going to experience a surge in their viewing figures this week, because a legion of Swifties is joining the fore.

The mere mention of a “secret project” is enough to drive the fandom into a state of frenzied speculation.

“Anti-Hero” premieres tonight after the game, followed by the release of Midnights itself, which will consist of 13 tracks, Swift’s famous lucky number. As for any secret projects, I guess we’ll just have to wait and see, eh?