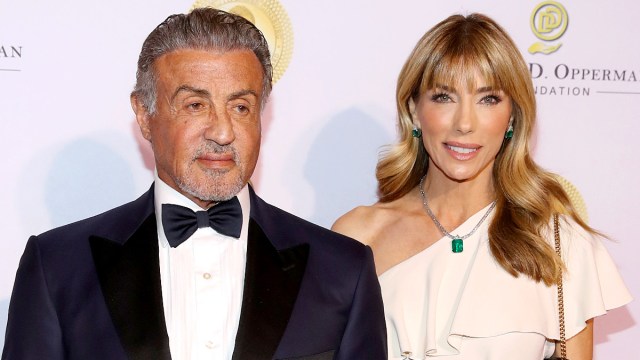 Sylvester Stallone and his wife Jennifer Flavin are divorcing after 25 years of marriage together, according to a petition “for dissolution of marriage and other relief” that Flavin reportedly filed last Friday at a Palm Beach County, Florida court. There are swirling reports as to the cause of the split, but it sounds as though it may have come down to Stallone adopting a dog without his wife’s permission.

“I love my family. We are amicably and privately addressing these personal issues,” Stallone said in a statement.

According to Entertainment Tonight, Flavin stated that she wants to remain living in their Palm Beach home amid the divorce proceedings and also claimed to believe that Stallone is hiding marital assets.

The split seems sudden in that the couple just celebrated their 25th wedding anniversary back in May. In a since-deleted Instagram post, Flavin wished Stallone a happy anniversary at the time. “Thank you for always keeping me laughing, loving and protecting our beautiful family!” she wrote. “Our marriage keeps getting better every year! I can’t wait to spend the rest of our lives together!”

Stallone likewise honored his wife in a similar post. “Happy 25th anniversary to my amazing wife,” he captioned a series of photos from throughout the years. “There is not enough words to describe what this incredibly selfless dedicated, patient, woman has meant to our lives and I only wish they could be another 25! Thank you sweetheart!”

However, recent days paint a quite different portrait of the marriage. On Aug. 10, Flavin shared a photo of her three daughters with Stallone: Scarlet, 20, Sistine, 24, and Sophia, 25. “These girls are my priority,” she wrote. “Nothing else matters. The four of us forever.”

The Daily Mail also reported earlier this week that Stallone had a large tattoo portrait of Flavin on his right bicep covered up with an image of Butkus, Rocky’s bull mastiff from the cinematic boxing franchise. However, Stallone’s publicist told the publication that he had simply intended to refresh the tattoo but that the procedure had gone awry, and was “unfortunately, unfixable.”

“As a result, he had to cover the original image with a tattoo of his dog from Rocky, Butkus,” his publicist added.

Interestingly enough, TMZ is claiming that the split has less to do with the dog tattoo and more to do with a real dog — specifically, a Rottweiler named “Dwight,” who he reportedly adopted against his wife’s wishes.

“Sources directly connected to the couple tell TMZ, the Rocky star wanted to get a Rottweiler for protection — protection for their family — but Jennifer did not want another dog. We’re told the 2 were at loggerheads over the pooch, and they each fiercely stuck to their positions.

Our sources say they had an extremely heated argument that brought up other issues, although we’re told none of those issues appeared to be marriage-enders.”

The actor was apparently blindsided by the divorce filing from the set of his new Paramount Plus series Tulsa King, which he had been filming on location in Oklahoma.

Stallone and Flavin had been married since 1997, after having met in a Beverly Hills restaurant in 1988. It was Stallone’s third marriage. The 76-year-old had previously been married to actress Sasha Czack from 1985 to 1985, as well as a two-year marriage to actress Brigitte Nielsen from 1985 to 1987. He was also briefly engaged to models Janice Dickinson and Angie Everhart in the ’90s after having split with Flavin before the couple eventually rekindled their romance.

If they worked it out before, hey, maybe they can again — dog or no dog.