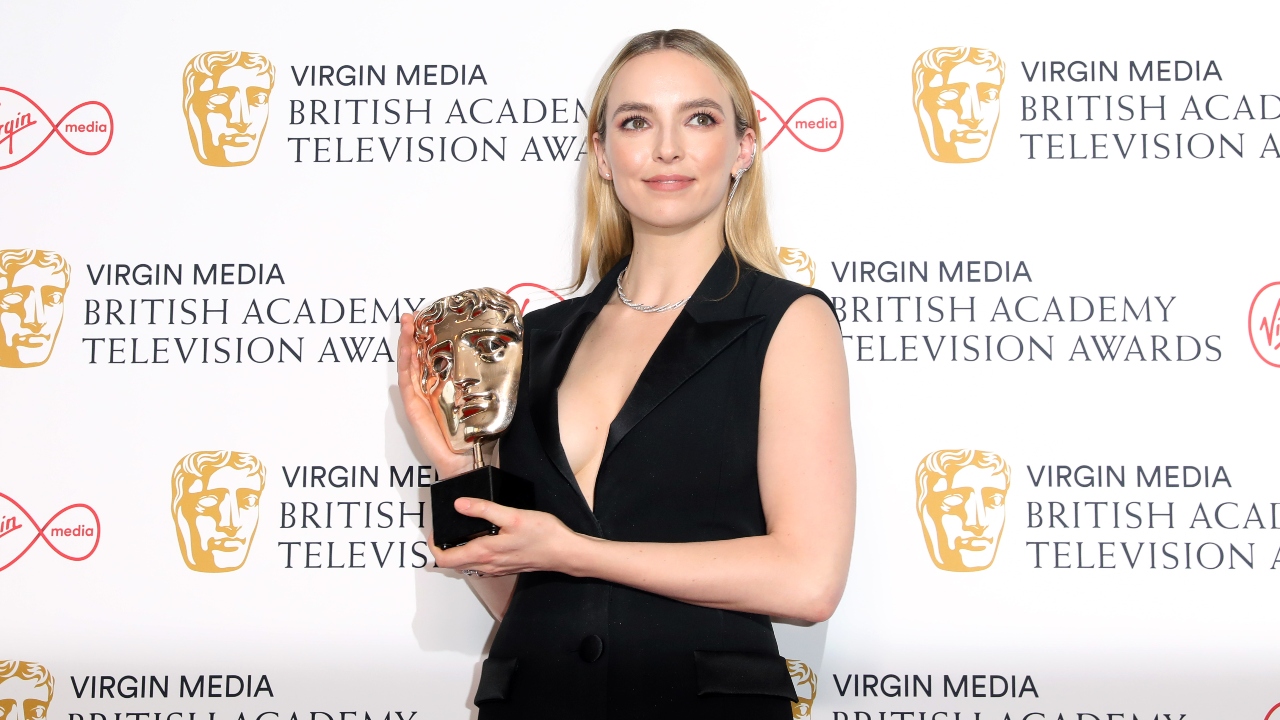 British-Liverpudlian actress Jodie Comer has just made her West End debut in Suzie Miller’s theatrical play, Prima Facie at the Harold Pinter Theatre. Directed by Justin Martin, Prima Facie sees Comer in a tour de force role as Tessa, a young, brilliant barrister who loves to win. According to the official Prima Facie synopsis, “She has worked her way up from working class origins to be at the top of her game; defending; cross examining and lighting up the shadows of doubt in any case. An unexpected event forces her to confront the lines where the patriarchal power of the law, burden of proof and morals diverge.”

Before making a name for herself as a two-time BAFTA and Primetime Emmy Award winner, Comer started at humble beginnings, launching her acting career with a small role as “Leanne” in an episode of The Royal Today in 2008. After appearing in several television series such as Waterloo Road, Holby City, Doctors, Silent Witness, Casualty, Law & Order: UK, Vera, and Inspector George Gently, Comer landed the roles of Chloe Gemell in the E4 comedy-drama series My Mad Fat Diary and Kate Parks in the BBC One drama series Doctor Foster (2015–2017), which became two of her most successful works. From there, she rose to prominence with a lead role alongside Sandra Oh in the BBC spy-thriller Killing Eve. Most of the world met Comer as Villanelle, but before she made it big as a Russian assassin, she used a diverse assortment of film and TV roles as stepping stones to fame. Here are the best Jodie Comer roles of all time.

Rounding off the Star Wars sequel trilogy, J.J. Abrams’ The Rise of Skywalker followed The Force Awakens (2015) and The Last Jedi (2017). The final episode of the nine-part “Skywalker saga” follows Rey, Finn, and Poe Dameron as they lead the resistance against Supreme Leader Kylo Ren and the First Order. Jodie Comer appears briefly in a cameo role as Rey’s mother in a small yet significant scene that fills in the blanks about Rey’s backstory and upbringing. It may not have given Comer a massive opportunity to shine, but The Rise of Skywalker allowed Comer to be one of several cogs in the well-oiled machine that is a monumental, multi-million dollar franchise.

Even before the Star Wars cameo, Comer had already started making waves in the acting world. Based on D. H. Lawrence’s 1928 novel Lady Chatterley’s Lover, Jed Mercurio’s romantic drama of the same name took off as a faithful 20th-century literary adaptation. Comer plays Ivy Bolton, the nurse and caretaker of Lady Chatterley’s husband, Clifford. Set in 1913, Lady Chatterley’s Lover sees Lady Chatterley’s husband return from the Great War disabled and needing constant care. This mishap leads to Lady Chatterley seeking out lust and passion from a handsome former miner that she meets spontaneously, therefore forcing her to choose between two different futures. Comer has a tastefully complex dynamic with James Norton (Sir Clifford), and the interactions between Mrs. Bolton and Sir Clifford form probably the most fascinating relationship in both the novel and the feature film.

Developed for Starz and based on Philippa Gregory’s 2013 novel of the same name, The White Princess stars Jodie Comer as Elizabeth of York, the Queen of England from 1466 to 1503. In the eight-part series, Elizabeth marries Henry VII to end the Wars of the Roses, but their mutual distrust, as well as the political interference from their mothers, threatens to divide the kingdom. Jacob Collins-Levy co-stars as Henry VII and both roles are well-acted, providing a fresh perspective on the early Tudor history. Fans of British periodic dramas have plenty to sink their teeth into, especially with Comer giving a believable, stand-out performance as Lizzie. Spawned from The White Queen (2013) — based on Elizabeth Woodville — and The White Princess, a continuation called The Spanish Princess — centered around Catherine of Aragon — debuted in 2019.

One of Comer’s more recent roles, Ridley Scott’s The Last Duel, based on the 2004 book The Last Duel: A True Story of Trial by Combat in Medieval France by Eric Jager, stars Ben Affleck as Count Pierre d’Alençon, Matt Damon as Sir Jean de Carrouges, Adam Driver as Jacques Le Gris, and Jodie Comer as Marguerite de Carrouges, a French noblewoman who married Jean de Carrouges in 1380. Set in Medieval France, Jean challenges his former friend Jacques to a judicial duel after his wife, Marguerite, accuses Jacques of raping her. The film leads to the main event by telling the story from the contrasting perspectives of the three main characters—Jean, Jacques, and Marguerite. The Last Duel is a convoluted, though-provoking and well-acted drama infused with gorgeous grandeur.

Another recent outing for Comer, Shawn Levy’s action comedy Free Guy stars Ryan Reynolds as Guy, a bank teller who discovers that he is an NPC (Non-Player Character) in a multiplayer online game and partners with another player, Molotov Girl (Comer) to unearth the schemes of the gaming company’s CEO (Taika Waititi). Free Guy was compared to Ready Player One (2018), The Matrix (1999) and the worldwide phenomenon from Epic Games, Fortnite. As previously mentioned, Comer plays Molotov Girl, otherwise known as Millie Rusk, the player who joins forces with Guy to find the source code to her original game Life Itself, which she co-developed with Keys (Joe Keery), an employee of Soonami Studio. Free Guy is all cleverly constructed, frivolous fun and marks a breakout film role for Comer, who received praise for her “funny, sweet and endearing” work.

Jodie Comer steals the spotlight as 26-year-old Ivy Moxam in the British drama series Thirteen. Created by Marnie Dickens, the series centres on Ivy, who was abducted at 13 and had been held in a cellar for the last 13 years. When she eventually escapes, the revelation has a staggering impact on her family and an investigation is underway to track down her active kidnapper. Aneurin Barnard co-stars as Ivy’s childhood crush, Tim, and Valene Kane plays D.S. Lisa Merchant, the Scotland Yard representative handling the kidnapping case. Even though it only consists of five episodes, Thirteen is a gripping drama that leaves the starting line in the dust and never slows down, redefining the teen drama genre in the process. Comer dazzles as Ivy, truly showcasing her unmatched range of emotions.

Doctor Foster: A Woman Scorned stars Suranne Jones as Gemma Foster, a general practitioner who suspects that her husband is having an affair. Interestingly, RadioTimes revealed that writer Mike Bartlett took inspiration from the ancient Greek myth of Medea, a wronged wife who kills her children and poisons her husband’s new bride, hence the add-on to the title: A Woman Scorned. In the British psychological thriller series, Jodie Comer plays Kate Parks, the 23-year-old with whom Simon Foster (Gemma’s husband) has been having an affair for two years. Doctor Foster: A Woman Scorned defies expectations to rise as less of a melodrama and more of a gripping “he said, she said” scenario that allows Jones to flex her acting muscles but gives at-the-time rising star Jodie Comer the opportunity to turn some heads — and she does so effortlessly.

At the 2022 British Academy Television Awards, Jodie Comer walked away with the Leading Actress prize for her role as Sarah in the COVID-19 drama film, Help. Marc Munden’s drama, as mentioned, focuses on the disastrous impact that the COVID-19 pandemic had on the United Kingdom. Comer plays Sarah, a young healthcare assistant who works at a care home in Liverpool and befriends her patient, Tony (Stephen Graham), who has early-onset Alzheimer’s disease. When the COVID-19 pandemic hits the UK in March 2020, the care home that Sarah works at suffers an outbreak amongst its patients. Without the knowledge or resources to protect against COVID-19, Sarah fights the pandemic alone and reminds the UK that carers like herself are mistreated by the government. Help hits home and retells the traumatic experiences that carers went through — and are still going through —during the COVID-19 pandemic in an evocative and harrowing way. Comer’s performance as Sarah during her hellish night shift alone at the care home is precisely the masterful filmmaking and acting that earned her the BAFTA.

British teen comedy My Mad Fat Diary, based on the novel My Fat, Mad Teenage Diary by Rae Earl, follows 16-year-old Rae, an overweight and mentally unstable teenager who finds it hard to fit in. Rae leaves a psychiatric hospital after four months and reconnects with Chloe (Comer), her childhood best friend. When Chloe introduces Rae to her friends, Finn, Archie, Izzy, and Chop, she attempts to hide her scarred past and impress the gang. Comer’s Chloe is the stereotypical attractive, popular girl; she gets all the boys, everyone loves her and she lives a seemingly perfect lifestyle that makes others envious. However, as the series progresses, Chloe becomes more vulnerable and reveals insecurities about herself that compromise the “ideal” life that everyone thinks she has. Comer delivers a moving performance that feels real, painful, relatable, and uncompromising in the best way possible. When compared to lead star Sharon Rooney, she may look like second best, but Comer knows her worth in the big leagues and even though Chloe can be as fake as press-on nails, she radiants a raw and real hurt underneath the facade of perfection.

How could we not? Comer owes the majority of her success to Killing Eve, the British spy-thriller that took the world (and the LGBTQ+ community) by storm in 2018. Having recently aired its finale episode, Killing Eve sang its swan song with “Hello, Losers.” The series follows Eve Polastri (Sandra Oh), an MI6 investigator tasked with apprehending Russian assassin Oksana Astankova (Jodie Comer), otherwise known as Villanelle. Eventually, as the chase progresses, Eve and Villanelle develop a mutual obsession and romance. Based on the Villanelle novels by Luke Jennings, Killing Eve gives Comer all the ingredients she needs to make a delicious concoction of villainy, humanity, and infatuation. Throughout Killing Eve, Villanelle stands out as a driving force for the series, but Jodie Comer and Sandra Oh’s impeccable chemistry is not to be ignored; the inseparable duo makes magic happen on screen and it shows in every breathtaking scene they share.