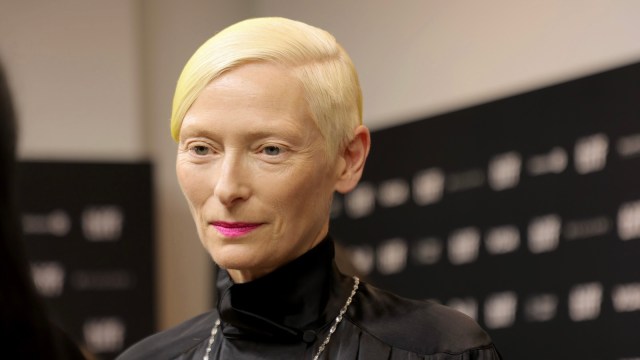 The otherworldly presence that is Tilda Swinton had another chance to prove that she is, well, from a whole other world at last month’s Toronto International Film Festival when she learned that mortals occasionally make something called “latte art” using coffee and foam as media. The visibly impressed Swinton was so taken aback by the caffeine-laced portraiture that she almost certainly made special mention of it in her latest reports to the beneficent alien overlords she traveled to this earth for.

Swinton’s reaction to her own latte likeness was recorded by “Celebrity Latte Artist” Brian Leonard, AKA Barista Brian, who posted the footage to his own TikTok. The ethereal actor seemed utterly gobsmacked by Brian’s foamy masterpiece, a portrait of Swinton herself that he presented to her during a reception for Swinton’s latest project, The Eternal Daughter, a mystery-drama penned and directed by Swinton’s frequent collaborator, Joanna Hogg.

“You have got to be kidding,” Swinton is heard to exclaim in the video. After which she apparently loses any capability of human speech until she has retrieved her phone to capture her likeness in the less ephemeral medium of digital photography. After meticulously framing cup and artist for a photo, Swinton proceeds to gush over Brian, calling his work “unbelievable.”

In fact, Swinton was so moved and complimentary that Brian posted the video in response to a follower’s question regarding his “all-time favorite reaction” to his work.

Brian’s regard for Swinton’s reaction is especially notable as he is no stranger to celeb reactions. Since first becoming involved with his chosen art form, he has gone on to feature at the Toronto International Film Festival, as well as the Sundance Film Festival, and has created latte likenesses of Daniel Radcliffe, Rainn Wilson, Patric Stewart, and the cast of Stranger Things, many of which can be seen on his TikTok, Twitter, and Instagram accounts.