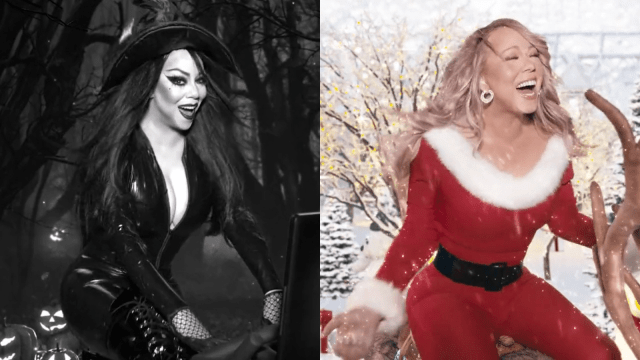 Do you hear that? Coming from the distance? Gone are the chilling sounds of creaking doors, squealing bats, and maniacal laughs from the deep. Instead, there’s the ever-so-familiar jingle of bells, the soft gallop of reindeer hooves on snow, and a jolly bellow echoing from the North Pole.

That’s right, folks. It is officially November 1 and, per the internet, that means it’s Santa Season. But, let’s be honest, we’re not going to wait for him for it to feel like Christmas, nor are we going to read a standard calendar. Instead, we collectively turn to another legend of truly mythic proportions: Mariah Carey.

In a video shared across social media, Carey is shown in a dreary, black-and-white set with a latex suit and witch’s hat upon a bicycle, doing her best Wicked Witch of the West cackle. As a calendar flickers by, showing Oct. 31 progress to Nov. 1, Carey transitions into a winter wonderland, singing ‘It’s Time’ complete with her iconic whistle tone.

With this completely free marketing Carey gives the Christmas season every year without fail, it’s a wonder Jesus Christ himself hasn’t risen from the grave to tell her to stop stealing his spotlight.

Of course, we have almost 60 days until we reach Dec. 25, but that isn’t stopping Mariah Carey from promoting her now-almost-30-year-old Christmas song set for holiday chart domination once again. In fact, it’s been November for a matter of hours and “All I Want For Christmas is You” is apparently already surging up the iTunes charts, according to Chart Data.

Well, hop to it, people. Scrap those jack-o-lanterns and get that Christmas tree, ready. Mariah Carey says so!