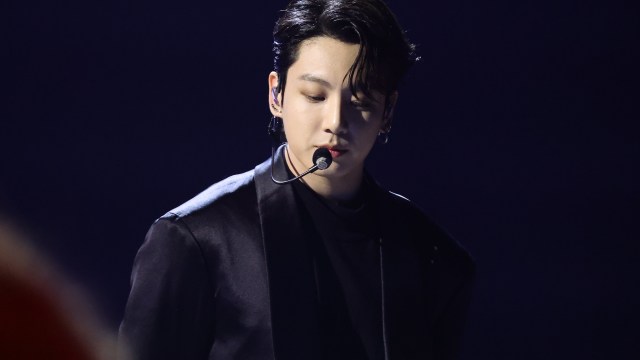 On Aug. 12, BTS‘ JungKook took ARMY Twitter by storm when the group’s official account posted a teaser picture that quickly went viral among the fanbase. In the photo, titled “Me, Myself and Jung Kook,” we can see the youngest BTS member with tousled hair staring straight at the camera with a sultry look in his eyes. What’s more interesting though, is the fact that JungKook appears to be dressed in a somewhat vampiric attire, complete with blood-red contact lenses and smudged red lips.

After the initial (and understandable) freakout, theories started to surface regarding what could possibly be in the works, and the hashtags accompanying the tweet certainly gave fans a helpful hint. According to Korean media, a BTS Photo-folio project will soon be released, and it seems like it will be a very hands-on creative project, in which the singers will be able to showcase their editing and design skills. JungKook’s individual Photo-folio will be the first of the seven to release, and it’s scheduled to drop on Sept. 1, the singer’s birthday. So far, there is no information about when fans will be able to see other members’ pictorials, but knowing BTS, it’s not too far-fetched to consider they might follow in the youngest’s footsteps and release their parts of the project on their own birthdays.

Following the picture that started it all, a video of JungKook titled “Inner Self” was also released on BTS’ official Instagram page, as well as some sophisticated-looking pictures in black and white. All these teasers have left fans in a euphoric state, as they took to social media to comment on the band member’s new look, and of course, in true ARMY fashion, not much time was wasted before the good-natured jokes started coming. And thus, the Vampire Jungkook saga began.

And, of course, whenever vampires are concerned, the Twilight comparisons can’t be avoided.

Whatever one may say about the BTS ARMY, one thing that can’t be denied is their remarkable sense of humor. These jokes wildly spread on the fandom side of Twitter, with more and more people joining the trend every minute. And as you can see by the number of likes and retweets, ARMYs always come in huge numbers, no matter the situation.

If you’re interested in BTS or are just curious to see what all the fuss is about, stay tuned for their next teaser releases, as they’re sure to continue in the next few days. And trust us, you won’t want to miss out.