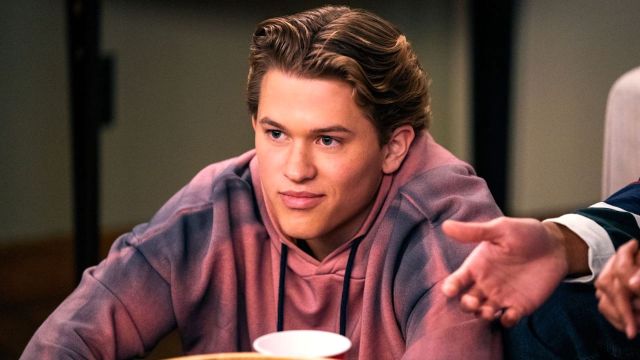 Hollywood royalty is coming to Netflix.

Reese Witherspoon and Ryan Phillippe’s eldest son, Deacon Phillippe, is making his acting debut with the highly anticipated third season of Never Have I Ever. The 18-year-old will guest star as a character named Parker, a debate student who will rival Devi Vishwakumar’s debate team.

According to a press release from Netflix, Parker comes from a “well-funded private school” where is able to “coast through debate tournaments thanks to his school’s advantages.” Also, he loves to party.

Parker (pictured above) will likely run in the same circle as Des (Anirudh Pisharody from Fox’s 9-1-1), a handsome Indian student from the same private school who may or may not throw a wrench in Devi’s new love affair with Paxton. If or when Parker will also play a part in Devi’s storyline is yet to be seen. Probably not romantically, but most likely academically.

So, who is Deacon Phillippe?

Phillippe is a musician who goes by the moniker Deacon, sans Phillippe. His 2020 single “Long Run” (feat. Nina Nesbitt) was a summer hit that garnered over 14 million streams on Spotify. The upbeat, electronic love song even scored the attention of record executive, Scooter Braun, who liked the video and surely got a kick out Reese Witherspoon’s excitement for her son’s first single — so much so that she offered to make a TikTok dance out of it, much to her son’s dismay.

Luckily for the young musician, his mom did not make a TikTok dance out of his first hit single, but the song definitely appreciated the publicity her offer provided. His follow up single “Love for the Summer” (feat. Loren Gray) dropped later that year to equal success. A new Post Malone-inspired single is reportedly in the works, expected to drop soon, according to HELLO!.

Phillippe graduated from high school this June, according to his and his parents’ Instagram accounts. A quick look at his profile paints a picture of a summer vacation most graduates would be envious of, including an overseas trip to Paris and some bridge-jumping with friends.

No new projects have been announced for Phillippe yet, so it’s unknown if he plans to truly follow in his parents’ footsteps or let his acting debut be a one-time-thing. What we do know is we can expect more music from him down the road.

You can catch Deacon Phillippe’s acting debut on the third season of Never Have I Ever when it premieres on Netflix starting on August 12, 2022.