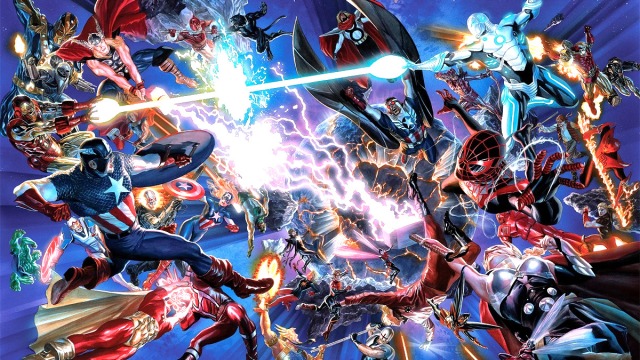 It may still feel like we’re in the fledgling moments of an MCU that’s set to be blown into cosmic proportions, but the world is only getting bigger with each passing show and movie, and the consensus is that it will all lead up to the multiverse-shattering Secret Wars event, based on comic storyline of the same name.

Again, with The Fantastic Four, X-Men, among others yet to make their MCU debut, we won’t be seeing this event on the big screen for quite some time, but that hasn’t stopped r/Marvel from reminding us just what kind of stakes we’re in for.

A user on the forum posted a panel from the 2015 Secret Wars comic line, in which Doctor Doom, empowered by Molecule Man to take the form of God Emperor Doom, faced Thanos, who MCU fans know as the greatest threat that canon has seen thus far.

After a short exchange, Doom rips out Thanos’ spine in one swift motion, firmly putting into perspective what sort of threats the MCU is in for once Secret Wars begins ramping up.

This prompted one responder to ask just how powerful Doctor Doom is.

And Reddit was all too happy to demonstrate what Doctor Doom meant as a threat to the Marvel universe.

Doctor Doom is perhaps the most anticipated MCU villain right now, and fans everywhere are begging Marvel Studios to let the character represent the cosmic threat that he is without undercutting it in any way. If the studio can get that message across like the comics did, then Doom stans everywhere should be pleased as punch.