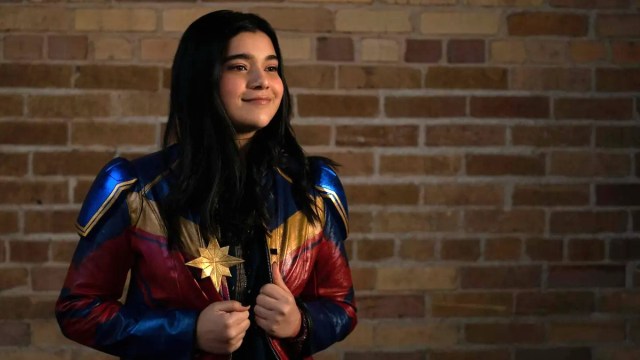 Marvel fan-turned-actor Iman Vellani revealed the first comic she ever read and/or owned.

The Ms. Marvel star did an Ask Me Anything in r/marvelstudios during which she answered all kinds of questions, including “What was your first ever comic?” which was asked by none other than Marvel-Official, AKA her “friends from work.”

Invincible Iron Man (2015) #1 was published on Oct. 7, 2015, when Vellani was just 13 years old. It’s a dynamic and highly-rated relaunch of Iron Man, the first in a series that ran for 14 issues. Penned by comic book legend Brian Michael Bendis, Invincible Iron Man followed a “lighter editorial style that [had] been successful,” wrote critic Sofia Marlasca, especially and coincidentally “with comics like Ms. Marvel.”

Vellani was also a fan of Ms. Marvel before becoming its title superhero in the MCU. “I knew exactly which comic books they pulled the scenes from [for the audition sides],” she told The Hollywood Reporter. Later in the interview, she talked about how she “nerded out” about Ms. Marvel during her audition:

“I was fully nerding out in front of [co-president] Louis D’Esposito and [casting head] Sarah Finn. I wanted to take full advantage of being there because I didn’t know if it was going to happen again.”

Moreover, the Pakistani-Canadian told The Washington Post that she “didn’t even realize representation was something that was missing” until she “read those [Ms. Marvel] comics for the first time.”

You can read the comics that inspired Vellani before watching her play Kamala Khan/Ms. Marvel on the eponymous Disney Plus series.