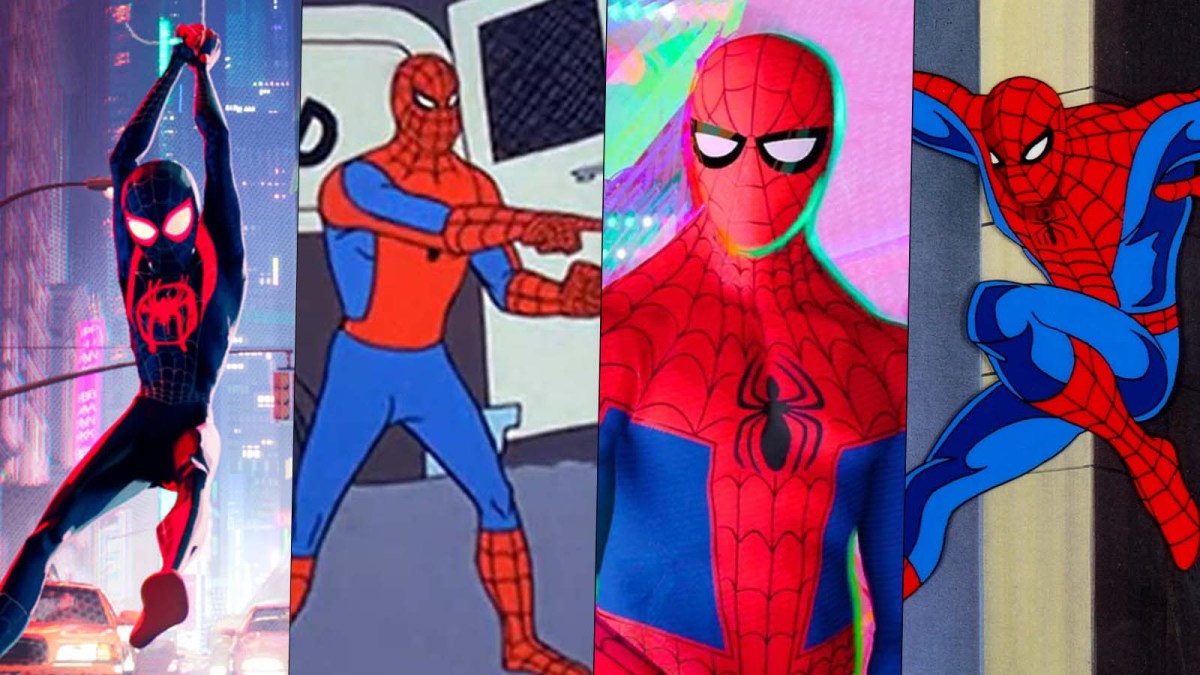 From the weird and wacky to the hard-boiled turtle slapper, it’s time to rank the 10 best animated Spider-Men.

The first 15 minutes of Across the Spider-Verse: Part One have been released, and it got us wondering: who is the best animated Spider-Man? Our Friendly Neighborhood Spider-Man was first brought to life in cartoon form in 1967, and he has been an animated staple ever since. Today, let’s explore the top-10 cartoon wall crawlers.

This was the second Spider-Man cartoon of the 1990s, and it’s definitely the weirdest. Spider-Man Unlimited was like Spider-Man 2099 meets the post-apocalyptic world of The Terminator. Little about this makes sense, and it has largely been forgotten.

In Spider-Man Unlimited, Peter Parker is dragged through time into an alternate future Earth ruled by the High Evolutionary. Normally, High Evolutionary keeps his scheming aimed at the cosmic side of things and deals with the Fantastic Four, Thor, and Adam Warlock. For some reason, he was shoved into a Spider-Man tale to change things up. That leaves Peter to lead a laser-infused rebellion against the totalitarian regime. Yeah, nothing about this makes any sense, but at least we get a futuristic spin on Venom and Carnage.

The one plus I can give this version of Spidey is that his suit looked good. It was a take on Miguel O’Hara’s original 2099 costume, but with a bit more of a traditional Spider-Man look. This cartoon was so odd that I simply couldn’t pass up adding it to this list.

After Spidey’s first cartoon in the 1960s, it took more than a decade for Spider-Man to return to the small screen. This time around, he got some company in the Amazing Friends. The pairing was odd, seeing Spidey team up with the X-Men’s Iceman and Fire-Star, a character created for the show that loosely resembled a cross between the Human Torch and Jean Grey.

The show itself is standard kid’s fare for the time. Hardly anything used logic, and it felt like one giant toy commercial. The good thing was that it introduced a wide range of characters from the Marvel Universe, including Magneto, Colossus, Sunfire, Doctor Doom, and Shanna the She-Devil. There was even an episode with Frankenstein’s monster, which turned out to be an android.

Yes, the animation is blocky. Yes, the dialogue is even cheesier than the Silver Age Spider-Man comics. However, despite these flaws, the ‘67 Spider-Man holds a special place in the hearts of fans across the globe. For children of the 1960s, this was their introduction to Spidey and his elaborate cast of villains. Arguably, this show helped elevate Spider-Man to new heights of popularity because it exposed him to a broader audience than comics alone. All other movies and cartoons that came afterwards owe a debt of gratitude to this corny cartoon. To this day, it’s still inspiring memes, so the legacy continues.

Say what you will about Nicolas Cage and his acting style, but he was perfect for Spider-Man Noir. This version of Spider-Man had the spunky dialogue straight from a 1930s detective story, and the character’s look, complete with fedora, definitely matched the era. Although Cage’s cartoony antics and overdramatic delivery can be a bit much for live-action drama, it worked well for Spider-Man Noir. Cage injected the character with personality and flair that made him a standout in a crowded field of alternate universe Spider-Men. Only Cage can deliver lines like “real biscuit boxers” and “hard-boiled turtle slappers” and make them sound normal… for him, at least.

Beit animated or live action, Into the Spider-Verse is one of the best Spider-Man movies ever made. While Sony may have a reputation of misunderstanding Marvel subject matter at times, the creative team behind Spider-Verse would appear to be comic readers. Not only did they understand what made Spider-Man such a great character, but they threw in some of his most obscure interdimensional supporting cast. We had Spider-Gwen, Penni Parker, Spider-Man Noir, and the real scene stealer of the movie, Spider-Ham.

The spoof throwback to a Looney Tunes cartoon was first created in 1983. He was the star of the animal-centric Marvel cast, and they all had their own pun names. No matter how many other characters came and went, everyone’s favorite remained Peter Porker, the Spectacular Spider-Ham.

By the 1990s, Spider-Ham faded into obscurity until Into the Spider-Verse dug deep into Spider-history to resurrect the idea. Although he didn’t exactly have character depth, Spider-Ham had some of the best lines in the movie. The gag about his hands being wet after he used the bathroom and everyone’s Spider-sense was triggered? Classic.

For many kids of the ‘90s, this was their introduction to the crazy world of Spider-Man. Sure, everyone had heard of the Friendly Neighborhood Spider-Man, but only comic fans knew the depth of the supporting cast and the sci-fi adventures. In fact, it was the ‘94 Spider-Man cartoon series that introduced mainstream audiences to the Spider-Verse.

The show was incredibly camp, and its rules were ridiculous, with everything from “Spider-Man can’t scare pigeons” to “no punching”. Despite that, Spider-Man pushed the envelope of what a Saturday morning cartoon could be. Above all, the show’s creative team got Spider-Man right. He was a little older than most fans expected, being a 20-ish college student rather than a high school teen, but he was still a superhero with a full-time job.

After Disney bought the rights to Marvel Comics and, by extension, Marvel Studios, the mega corporation dropped the ax on some classic cartoons. Avengers: Earth’s Mightiest Heroes, which retold Marvel history in such amazing fashion that it rivals the MCU’s storytelling, and The Spectacular Spider-Man were both brought to an end. Out of the ashes came the much more PG-friendly replacements, Avengers: Assemble and Ultimate Spider-Man.

Obviously aimed at elementary school-aged children, Ultimate Spider-Man was no Spectacular Spider-Man, but it wasn’t without its charm. Like the Homecoming trilogy, Ultimate ignored Peter Parker’s history, much to the dismay of purists like myself. Instead of struggling with real-world problems, this Spidey was training to be a S.H.I.E.L.D agent with a grumpy Nick Fury filling in for J. Jonah Jameson. Rather than operating on his own, Spider-Man was part of a veritable Young Avengers team, training with teenage versions of Luke Cage, White Tiger, Nova, and Iron Fist.

What makes this Spider-Man unique is the humor. Whether you are a kid or an adult, the show will have you laughing out loud, at least from time to time.

As we get down to the top-three animated Spider-Men, we separate the wheat from the chaff. While the other seven entries on today’s list are exceptional and fun Spider-Men (and one Spider-Ham), the difference is how the man behind the mask is characterized. Spectacular Spider-Man exemplified this throughout each episode. In fact, this beloved series featured the best interpretation of the Black Suit Saga that introduced Venom than any other cartoon or movie.

Once again, this version of Spider-Man finds Peter as a down-on-his-luck teenager. Uncle Ben has died, and his poor old Aunt May is the only one taking care of Peter. Staying true to the Stan Lee origin story, Peter moonlights as Spider-Man while dealing with the social nightmare known as high school. However, Spectacular put a modern spin on the story and scraped away much of the cheese we had seen in other Spider-Man cartoons to that point. The result was the best version of both Spider-Man and Peter Parker the small screen has ever seen. If there is any cartoon series that deserves another season, it’s Spectacular Spider-Man.

Just because his name isn’t Peter Parker doesn’t make Miles Morales any less of a Spider-Man. Created for Marvel’s Ultimate line of comics, the Spider-Man of the 21st Century was met with ample criticism at the time. Written by Brian Michael Bendis, Miles was introduced in Ultimate Fallout #4. Bendis infamously had written the Ultimate Universe’s Peter out of the story, having been murdered by the Ultimate Green Goblin. That left the job of Spider-Man in Miles’ hands. Of course, comic fans are notoriously reluctant to have their favorite characters replaced, but Miles would eventually win over millions of fans worldwide.

Miles got his mainstream break as the star of Into the Spider-Verse. The treatment of his character is another example of how Sony’s animation wing understood what makes a superhero. It was less about fancy moves and more about his heart and struggle. Miles exemplified being an awkward teenager in every way possible. While much of it was comedy, we also see his heart break at the loss of his world’s Spider-Man and later his hero, Uncle Aaron, who was also hunting him as the Prowler. The combination of laughs, loss, and triumph made audiences fall in love with Spider-Miles.

Before the premiere of Spider-Man: No Way Home, Tom Holland remarked that if he is still playing Spider-Man when he turns 30, he’s done something wrong. Tom obviously hasn’t read many comics.

What makes Spider-Man such a relatable character is that he has real problems. One of those happens to be aging. Sure, Peter Parker began as a mild-mannered teenager in the 1960s, but he grew up. From the late ‘60s and into the early ‘90s, the Spider-Man comics matured. By the time the Venom symbiote came around, Peter and Mary Jane had married, and he had to balance his marriage and career along with being a superhero.

That brings us to Into the Spider-Verse. Voiced by Jake Johnson, Peter B. Parker is the middle-aged Spider-Man we deserved. To that point, it was the first time we had seen an adult Spider-Man on the screen. Although it was played for laughs, we were given a healthy dose of reality in Peter and MJ’s divorce and the emotional toll it took on him. Through it all, he was still as charming and witty as ever, but there was an underlying sadness as well. It made him more human than we’d seen before, and that is what made this version perfectly imperfect.