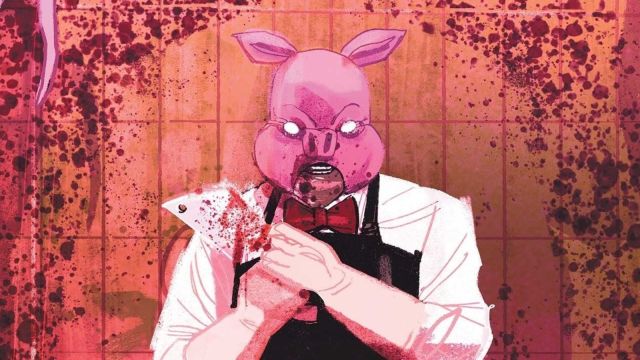 The DC Comics universe boasts some truly astounding and groundbreaking characters. While their heroes are some of the most well-known on the planet, their villains could perhaps be even more iconic.

Eyebrows were raised when a report suggested Warner Bros. had been planning spin-off films for several more obscure Batman villains, and none more eyebrow-raising than the namedrop of Professor Pyg. A character almost entirely unheard of by mainstream audiences, here’s what you need to know.

Who is Professor Pyg?

Debuting only recently in comics, Pyg’s first appearance came in 2007. Created by long time DC writer Grant Morrison and artist Andy Kubert for Batman #666, he’s one of the most peculiar and shockingly dark characters Batman has fought.

Lazlo Valentin was a scientist and surgeon who had a schizophrenic breakdown (ticking the Batman box of beating up the mentally ill) and turned to a life of hideous serial killer activity. Valentin adopted a pig mask and went about kidnapping and murdering people to be part of his experiments.

A common use for his victims was to be turned into a “dollotron”, a barely organic robot who fights for Pyg and are the canvas for his further experiments. Another popular choice is human-animal hybrids, because that always ends very well for all concerned. Morrison pictured Pyg as being so far disconnected from reality, but also based him off a famous Greek mythical sculptor.

Pygmalion is a legendary figure who fell in love with his own sculpted creations, and is the subject of the text Metamorphoses. It’s fairly typical for DC characters in particular to have some basis in myths, particularly Greek myths; Wonder Woman has seen her origin become more and more intertwined with mythology, as well as Aquaman’s obvious links to Atlantis.

Does he have any superpowers?

Pyg doesn’t possess any superhuman strength and isn’t a metahuman, but instead just a very disturbed man who probably needs to see a therapist. Men will literally carve victims into pigmen before they consider going to therapy.

He’s an expert surgeon and is generally depicted to have genius level intellect, making him a formidable and horrific foe for the Caped Crusader.

Has he appeared in any movies before?

Pyg’s only appearances in live-action to date have on television. His first appearance was as a villain in the pseudo-children friendly series Beware the Batman, before a far more grotesque version was seen in the fourth season of Gotham. Portrayed by Tony-award winning actor Michael Cerveris, it saw him don his iconic pigmask as should always be the case.

The news of Warner Bros. interest in giving him a standalone film feels like a reaction to the recent surge in true crime and serial killer fiction. Netflix’s Dahmer series has become the second most-watched English-language series on the entire platform, and movie studios are always looking at what’s going big so they can replicate it.

No further information is known yet, but it feels like something which could gel well with Matt Reeves’ Batman universe.